I thought most people graduated college in four years, but according a New York Times article, only about 20 percent of full-time students earn a bachelors degree in four years. That means the cost of college is even higher than many may estimate coming out of high school. If you want to save money on college, graduating a semester early is a fantastic way to do it.

Why Aren’t More People Doing This?

To many people, not graduating on time might not seem like a big deal. After all, more college means more fun, right? However, when you think of how expensive college is, adding extra semesters can dramatically increase your overall cost of school, especially if you are like the vast majority of students who are taking on student loans to finance their education. By intentionally trying to finish college at least a semester early, you can reduce the amount of money you have to finance through student loans.

As anyone who is paying off student loans now can tell you, they aren’t cheap, even with good refinancing options through companies like Credible and SoFi, so the less debt you have coming out of college, the better.

Even though I transferred colleges, I managed to graduate one semester early. At the time, I didn’t think much of it, but now I realize how rare it was. So, I’d like to share how I graduated early in hopes it can help someone else out their save money on college costs.

One thing that helped me graduate a semester early was that I didn’t change my major.

When you change majors, you might change the requirements needed to graduate. My husband changed from engineering to biochemistry, and that added a semester to his college career. Plus, some of the classes he needed to graduate only happened in the spring or the fall.

This brings me to my next point: you have to plan.

Part of the reason I was able to graduate early is that I did some long-term planing. When I was a junior I looked at how many classes I had left. I also researched when the university offered the last few classes I needed.

I was able to determine what my schedule needed to be. I also figured out that if I took one extra class and had a 17 credit hour semester the following semester, I could graduate early. And, that’s exactly what I did. I took 120 credits in total, which was exactly what I needed to get my diploma.

Had I just signed up for the classes I thought I needed, I might not have taken that one extra class, which would have added on an entire semester to my college career.

There are lots of fun classes to take in college, and your degree requirements do allow for electives. I know I took several dance classes through my college career, but I never took more than I needed.

Don’t take a class just because it sounds fun, unless it’s time for you to fill in an elective. Remember, if you take too many electives, you run the risk of mismanaging your schedule and not getting the other classes you need to graduate.

You have the rest of your life to take fun classes, whether it’s an online course or a cooking class. College classes are extremely expensive, and you’re there to learn, not rack up more student loan debt than you need to because a course on magic sounds interesting.

As I mentioned earlier, I had exactly 120 credits, no more, no less. Why pay for more credits when you can graduate with 120 as long as you took the right classes?

tip#4: Get as Many Credits As You Can Ahead of Time 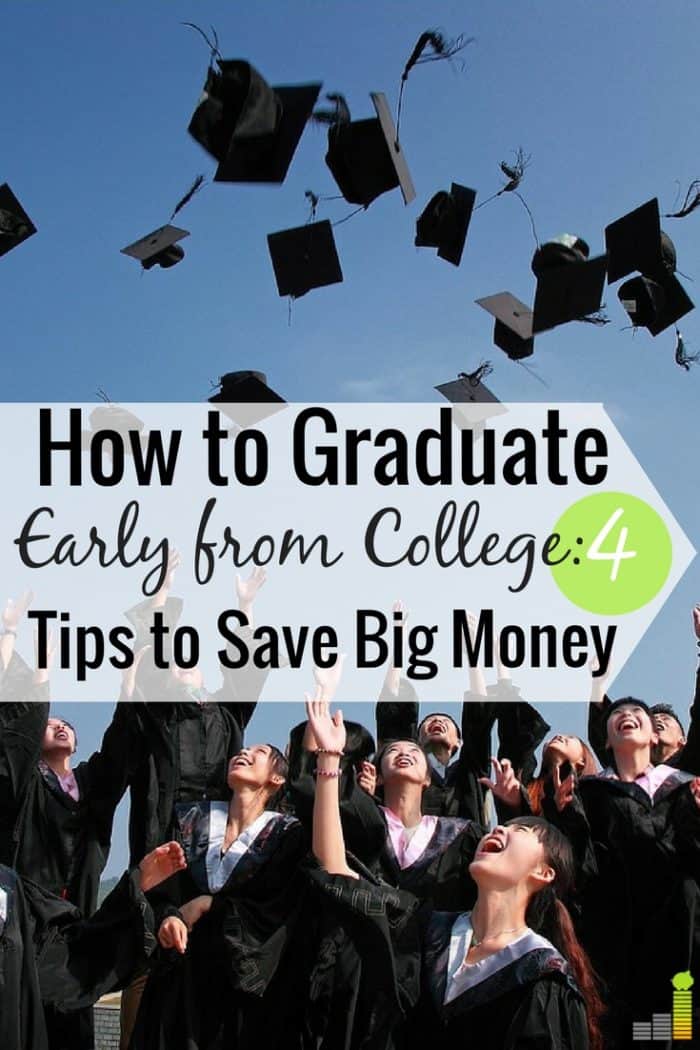 I was also able to graduate early because I went into college with some credits and I also got a full scholarship to study abroad in the summer.

Studying abroad in the summer between my junior and senior years of college netted me about 8 credit hours. I also went into college with more than that from completing some summer programs in high school and testing out of a few things.

I honestly wish I would have done this more. Had I gone to community college as a high school student and taken more of my core classes there, I would have saved even more money.

Ultimately, it’s definitely possible to graduate a semester early, and it’s something everyone should think about and plan for to save money on college. Again, at the time, I only did it because I’m a little Type A and I was getting burned out from school.

I didn’t want to take a whole extra semester when I didn’t have to. I’m actually embarrassed to say that saving money was the last thing on my mind at that point. Unfortunately, they don’t teach you about saving money in college and like many of you reading this, I had to learn it after I graduated.

However, now I realize that there were some steps I took to get there, so I hope this helps anyone else considering graduating from college early and reducing their student loan burden in the process.

How long did it take you to graduate from college? What ways did you try to save money on college? What advice would you give to high school students about to enter college to reduce their financial burden?

The post How to Save Money on College by Graduating a Semester Early appeared first on Frugal Rules.