The new NFL season is right around the corner, and you may be wondering how to watch NFL games without cable. We kept our DirecTV contract for years too long because I thought there were no other options to get my football fix. Thankfully, there are many answers to the question of how to watch NFL without cable – some of which may even be online or for free.

Sports are the big thing that holds many back from cutting the cord. I get it. I love football myself, but it’s not worth the $100+ per month it costs to scratch that itch. Since we’ve been cable free, I’ve found many ways to watch NFL games without cable and I’m confident that you can too.

How to Watch NFL Games Without Cable

There are many ways to watch NFL without cable; you just have to know what you want, the benefits and drawbacks of the top options, and how much you can save. If you want to know how to watch NFL games online for free, I share some of the options to do that and increase your savings here.

The Best Way to Watch NFL without Cable

The best way to watch NFL without cable is with an antenna. When we canceled DirecTV (here are some of the best ways to cancel DirecTV) the reps told us we couldn’t get football games or any other shows for that matter with an antenna.

Of course they were wrong. An antenna is the cheapest way to get NFL games or any network show for that matter. After a small one-time cost, you get any local content, in HD, for free.

We have the Mohu Leaf 50, which retails for around $60 and it works great. Digital antennas start around $20 and go up from there. Here are some of the best digital antennas on Amazon to consider if you need to cut the cord, with 1byone, Wsky and Antennas Direct being among the best.

Having an antenna will get you any games shown on the local networks, along with Sunday Night Football on NBC. Yes, you will be limited to the local games, but that’s enough for my liking.

If you like to have DVR capability, you won’t get that with an antenna. The Tivo Roamio is a good standalone DVR option to use if you want to record games.

Just keep in mind that the DVR only works with HDTV antennas and won’t work with any of the best TV streaming services.

How to Watch Monday Night Football without Cable

Using an antenna is a great way to watch NFL games without cable. However, you won’t get access to Monday Night Football or Thursday Night Football. Those games are on ESPN and the NFL Network, respectively, which aren’t available through an antenna.

Don’t despair. There are still ways to watch NFL without cable. The solution can be found through the growing number of streaming services that provide you access to cable channels for a significantly lower price than a standard cable bill.

I’ll give a brief synopsis below of those options, along with what packages you need with each respective plan.

Sling TV: Sling TV is one of the oldest cable streaming services available. Sling offers two base packages, Sling Orange and Sling Blue – for $20 or $25, respectively.

You can sign up for a free 7-day trial to test out the service to see if it works for you.

If you want access to NFL RedZone, Sling TV offers that as part of the “Sports Extra” add-on package that costs $10 per month. Sling TV offers additional features, such as a cloud-based DVR and other services. Check out our Sling TV review for a breakdown of the service.

DirecTV Now: As the name implies, DirecTV Now is a contract-free offshoot of DirecTV. DirecTV Now offers four packages, and you can get access to ESPN as part of their $35 per month package, which also is their cheapest monthly option.

You can sign up for a free 7-day trial to test out the service to see if it works for you.

Unfortunately, DirecTV Now, like other streaming options does not provide access to the NFL Network so you’d be out of luck for Thursday night games aired on that network. However, they do offer access to other sports channels, like Fox Sports, as a part of the cheapest package.

DirecTV Now offers a variety of other services, some of which are an upgrade to Sling TV. Check out our DirecTV Now review for a full breakdown of the service.

PlayStation VUE: PlayStation VUE is another one of the older streaming services on the market. Like DirecTV Now, they offer four packages to choose from. The base package, “Access” hooks you up with ESPN for $39.99 per month. Like Sling TV, PS Vue also gives access to the NFL RedZone channel if that is a priority for you.

If you want both ESPN and the NFL Network you must move up one plan to “Core,” which costs $44.99 per month. PlayStation VUE offers a free 5-day trial to test out the service.

I’ve not had the chance to try PS Vue, but they’re one of the more popular options to get NFL games without cable – especially since they offer a cloud-based DVR and allow you to stream up to five devices at once.

Hulu Live: Hulu Live is a new streaming service offered by Hulu. They offer one base package, which costs $40 per month and gives you access to ESPN. You won’t get access to the NFL Network, but if you’re a college football fan, they do offer access to the SEC Network, not to mention the full suite of ESPN channels.

You can sign up for a free 7-day trial to see if the service works for you.

I’ve personally not used the service, but have used the legacy service a number of times and really like what they have to offer. Hulu Live does offer a cloud-based DVR and the ability to stream on multiple devices at once to help scratch your NFL fix.

YouTube TV: YouTube TV is the newest streaming option to help you watch the NFL without cable. YouTube TV offers one package with 48 channels for $35 per month.

This does provide access to ESPN (no NFL Network unfortunately) but you do also get Fox Sports, the SEC Network and the Big Ten channel, among other sports channels.

The one drawback to YouTube TV is that it’s only offered in a few select cities so it may not be an option for many. Check here to see if YouTube TV is available in your area.

Want to watch NFL games, but want to keep the monthly cost even lower? There are other options beyond the above cable replacement services. Some of the options are relatively good, while others are lacking. Below are some of the best options to watch NFL games online.

CBS All Access: Not every Thursday night game is on the NFL Network, some are on CBS. CBS All Access allows you to get those games online, if you don’t have an antenna or cable package and is only $5.99 per month.

This gives you access to all the CBS broadcasted games in your area, not to mention their other shows.

Sign up for a free 7-day trial to see if the service works for you.

NFL Game Pass: If you can’t watch games live as they are, NFL Game Pass may be the option for you. For $99 per year, NFL Game Pass allows you to watch all games same day (typically delayed a few hours after airing), out-of-market preseason games, streaming, games dating back to 2009, DVR functionality, coaches’ film and the entire NFL Films library.

If $99 seems a bit much, you can sign up for a free trial to see if you like it.

Verizon: I’m not a fan of a high priced cell phone bill, but if you have Verizon, specifically the “More Everything” plan, you can stream games for free.

The one catch? You can only stream on a phone or tablet, not on your TV. However, it does give the added bonus of allowing you to watch NFL RedZone without cable, right on your phone.

NFL Sunday ticket: Yes, you can get the popular NFL Sunday Ticket without DirecTV – but there is a catch.

If you live in an apartment building that does not allow satellite dishes, you may be able to get the streaming version of Sunday Ticket. Check here to see if you’re eligible for this service.

Amazon Prime: That’s right, Amazon and the NFL signed a deal earlier this year that will stream 10 Thursday games broadcasted on CBS or NBC on Amazon.

You can view those games on a variety of devices that have the Amazon Prime video app.

Sign up here to get a free 30-day trial to Amazon Prime to stream the games for free. 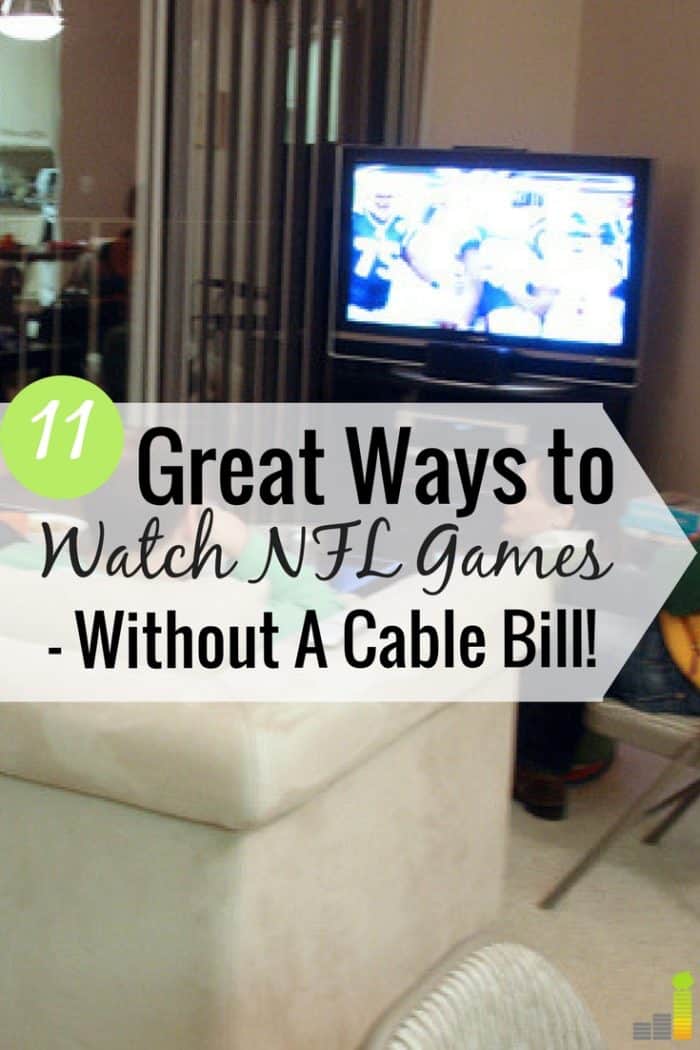 The question of how to watch NFL games without cable has become much easier to answer over the past few years. There are many options available that can save you hundreds of dollars each year.

With that in mind, don’t fall for DirecTV’s trick of offering you the NFL Sunday Ticket for “free.” Taking the free bait will cost you thousands of dollars. In Omaha, you need to have a monthly plan that’s at least $60 per month to get NFL Sunday Ticket. That $60 is before fees and taxes, so it’ll cost you even more.

That price may seem decent, but after your first 12 months, the price will skyrocket to over $100 per month – all to get NFL Sunday Ticket. It’s not worth the price. I used to think it was until I learned I could get all the games I want without much effort.

I know it feels scary to cut the cord (here’s my complete guide on how to cut the cord) especially if you like to watch football. There are many ways to watch NFL games without cable, and most will save you big money with little sacrifice.

How do you watch NFL games without cable? Has losing the ability to watch sports the way you like kept you from cutting the cord? What other channels do you feel like you can’t live without?

The post How to Watch NFL Games Without Cable appeared first on Frugal Rules.