We talk a lot about money here on Frugal Rules. I’m not afraid to admit that I love money, but really what I love is the opportunities that money makes possible. When you manage money wisely, it creates countless ways to better your life. Much of what we know about money is thanks to others who are wiser than us. A quick look at many of these motivational money quotes makes that abundantly clear.

What I like about many of these top money quotes is that they’re grounded in enjoying life and not just pursuing money to have more of it. Rather, they touch on the importance of using money as a tool to get the kind of life you want.

For some that may mean earning more, and that’s ok. For others, it means making less, but thanks to how they live, they’re able to lead a rich life – and that’s okay too. That’s also not to mention the various shades between those two possibilities.

With that in mind, I thought I’d share some of my favorite motivational money quotes today that I’ve used to inspire me in life. Also, they’re in no particular order – I love all of them! 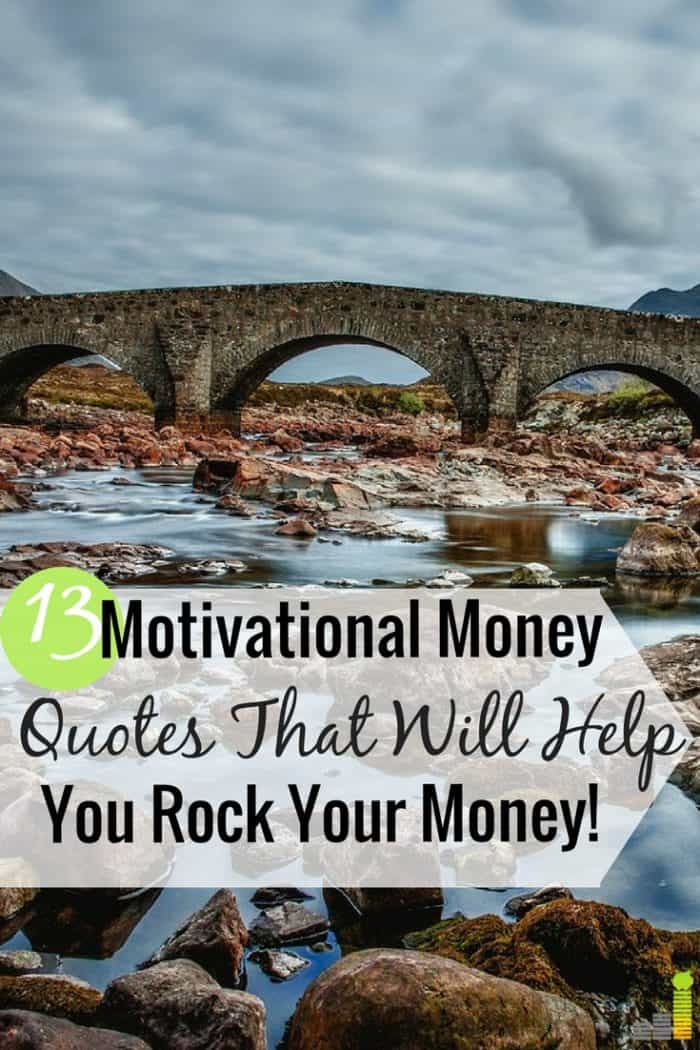 I love this money quote. It goes against the grain of our consumerist culture and Buffett nails it. Saving first is the best way to break the paycheck-to-paycheck cycle and control your money, not the other way around.

“Wealth is the ability to fully experience life.”

Experiencing life, and enjoying it, is true wealth – not in the mere accumulation of money. Again, against the grain of our culture, but so true.

“Expect the best. Prepare for the worst. Capitalize on what comes.”

I’m not necessarily the biggest Zig Ziglar fan, but this quote is spot on. It calls on us to be mindful of our situation and make the best of what comes our way – in money and life.

“Opportunity is missed by most people because it is dressed in overalls and looks like work.”

This isn’t necessarily tied to money, but I don’t really care. If you’re not willing to put in the work, you’ll be amazed at how many fewer opportunities you’ll see.

“Time is more valuable than money. You can get more money, but you cannot get more time.”

Money is great, you can always find ways to make extra money but time is a limited commodity.

Dave Ramsey has a lot of critics, but I’m not one of them with this quote. Ramsey is spot on with his view – it’s one of living within your means and avoiding debt so you can have the life you want in the long-term. It no doubt requires discipline, but it also creates freedom.

“You can only become truly accomplished at something you love. Don’t make money your goal. Instead, pursue the things you love doing, and then do them so well that people can’t take their eyes off you.”

This is another inspirational quote that isn’t directly tied to money. Again, money is great but make your life a pursuit of what you love and do well, not of money for money’s sake.

“An investment in knowledge pays the best interest.”

I’ve included a second Buffett quote on my list and like it nearly as much as the first. When I met Warren Buffett, it was clear he aims to surround himself with people that challenge him in some way. This is good when it comes to money because it challenges you to go forward and not back in your finances.

Stanley, from Millionaire Next Door fame has great insight with this statement. We like to think having money means you know how to manage it. Quite often, I’ve met those with more than average wealth to be foolish with money, and it’s those who are “average” that are killing it with their money. It’s proof that smarts don’t come with money, but with willpower, smarts are more than possible.

As my Dad always used to say, you see a person’s priorities in their checkbook. Simple, but painfully true.

“Money is only a tool. It will take you wherever you wish, but it will not replace you as the driver.”

Another simple, but true money quote. Money is a tool, but you still have to know how to use it. Following certain personal finance rules helps you use that tool wisely and get you to the destination you want.

The above only scratches the surface of motivational money quotes. They showcase a broad range of ideas but have this one thing in common – being wise. With wisdom, you can absolutely kill it with your money, regardless of how much you may have when you start out.

What are some of your favorite inspirational money quotes? Why do you think many equate high salary with money smarts? What’s one new thing you’ve done this year to manage your money better?

The post 13 Motivational Money Quotes to Help You Rock Your Money appeared first on Frugal Rules.