Frugality gets a bad rap. We were visiting with family recently, and they view frugality as always being cheap and not spending money. At least, that’s how they labeled me.

That being said, many readers I speak with view frugality as similar to deprivation. They think being frugal means you go without, and you can’t have anything you want. They see stories of people who call themselves frugal that reuse their dental floss or view dumpster diving as a sport and think that’s what it means to be frugal.

Let me dispel that myth; it’s not frugality.

It’s easy to confuse frugality with deprivation. Frugal living is often defined as being thrifty or purposeful with your money, to the point of finding great value in what you choose to buy.

Deprivation, on the other hand, is going without…on purpose. It’s choosing to avoid purchasing items you view as unnecessary in life and keeping the cash for yourself.

Even looking at the two it’s easy to see how you might confuse them, mistaking them for the same lifestyle. However, being purposeful with money is the only similarity between frugality and deprivation.

What often gets overlooked with frugality is that frugal living isn’t about depriving yourself. It’s about what you value. It’s being purposeful with your money so you can have what you want – not just going without because you think it’s bad to have something new or pleasurable.

The frugal person sees money as a tool to get where they want and find things to enjoy along the way. Those who deprive themselves think it’s bad to bring anything new into their lives.

In short, one seeks some sort of balance; the other seeks an extreme that’s difficult to maintain.

Dieting is largely prevalent in our Western society. I’ve read studies that indicate upwards of 50 million or more people diet each year. That’s a significant number! Unfortunately, most don’t find success. In fact, only five percent of individuals keep the weight off long-term.

One of the main reasons for the lack of success is our penchant for binge dieting. We don’t prepare ourselves, try something extreme and give up when the weight loss slows down or comes back.

Managing money can be the same way. You can deprive yourself for a short period of time, but over the long-term, you may find yourself slipping into overspending or, worse, going into debt.

The answer to both situations is staying away from the extremes and finding something that works for you.

Frugality is About Finding Balance

Like many other endeavors, frugal living is about finding balance. It takes work to achieve and is a pursuit you should engage in for yourself, not to please others. Otherwise, it simply won’t work.

Frugality is not effortless, though. It takes work to find what matters to you; it requires careful thought about what you value. That takes time.

It takes experimenting to find ways to save money every month that you can live with and using the savings to help you reach your goals.

Along the way, it’s okay to scrap things that don’t work for you or you don’t like. Remember, you want a balance that matters to you as that will encourage you to work harder to reach your goals. 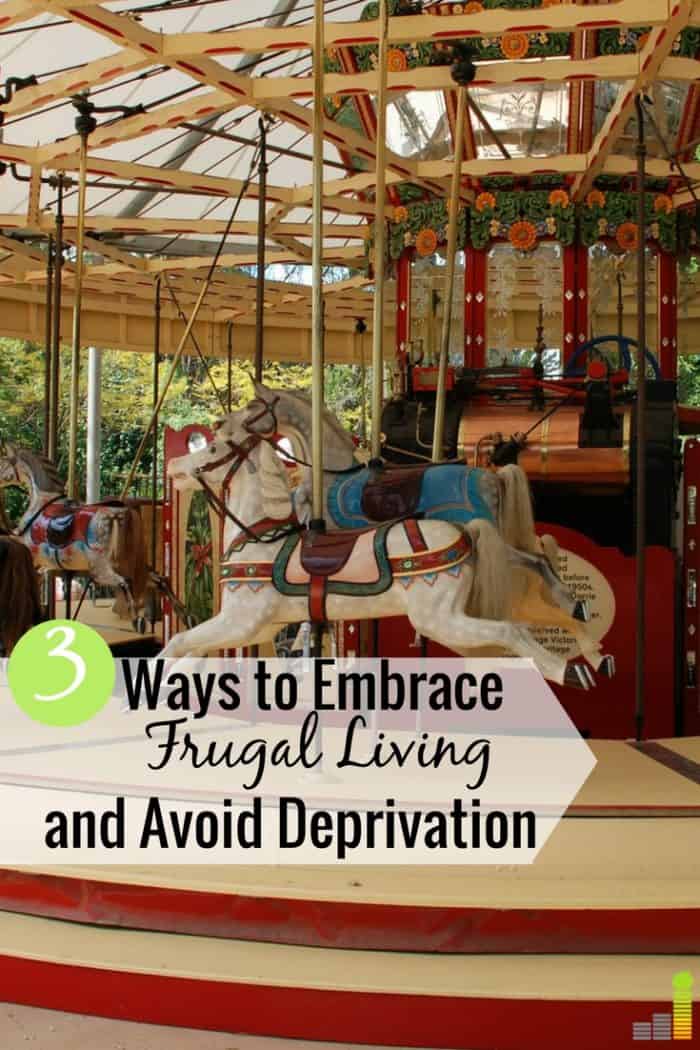 Step off the Consumerist Merry-go-Round

The real crux of living a frugal life is avoiding the advertisements that seek our attention. The true goal of advertisers is to make us think there is something missing in our lives and that buying the new, shiny product they’re putting before us will solve all our problems.

Wrong, wrong and wrong! What those ads don’t tell you is that the item will eventually break down, not work the ways it’s intended to work or that the luster will wane away for us over time – all resulting in us losing money.

Deprivation, on the other hand, chooses to go without all things because they’re evil, a waste of money or something else unbeneficial. Frugality jumps off the merry-go-round and in to using money as the tool it’s intended to be.

That typically involves delaying gratification and knowing what’s truly important to you. It uses tools like the 48-hour rule to avoid needless spending. A frugal person knows that life is fuller and simpler when ‘wants’ are clear and finds balance in that, not in trying to live an extreme lifestyle that’s difficult if not impossible for most people to maintain.

What are some other things you think make it difficult to live a life of deprivation? What are some of your favorite benefits of frugality? How do you determine if a new money saving hack is worth the effort?

The post Frugality is Not Deprivation appeared first on Frugal Rules.