I wish Hulu with Live TV had been around three years ago. I remember sitting at my kitchen table paying bills, including our overpriced DirecTV bill, which came with a $110 price tag and a two-year contract. Paying that bill each month made me sick to my stomach.

So, we decided to cut the cord. While it meant breaking our contract, it was well worth it. Within two months we had recouped the $100 or so that it cost to break contract and scrap our expensive cable service early.

In the three years since, we’ve experimented with and provided reviews on streaming services. As with our other streaming service reviews, this Hulu with Live TV review covers everything you need to know about Hulu Live TV including what channels you’ll get, what devices you can watch Hulu with Live TV on, how reliable the platform is, how it differs from traditional Hulu and Hulu Plus, and of course, what it costs.

If you’ve been looking for a reason to cut the cord on your expensive cable contract, Hulu with Live TV could be just the streaming service to satisfy your needs.

What is Hulu With Live TV?

Hulu has been around for nearly a decade. I still remember when it burst onto the scene with cheesy Alec Baldwin commercials advertising Hulu as “an evil plot to destroy the world.” In reality, it turned out to be a brilliant plot to destroy overpriced cable contracts.

Hulu is a streaming service and a great way to watch the content you love without overpaying for it or getting yourself locked into an expensive contract.

Traditional Hulu or more simply, Hulu, is similar to Netflix in that it offers access to shows from major networks like ABC, NBC, CBS and Fox as well as cable networks like HGTV, History Channel and more.

At $7.99 per month, Hulu is incredibly affordable; the only downside is that you have to wait 24 hours after a show first airs to watch it.

The exception to the 24-hour rule is Hulu original content, like the critically acclaimed The Handmaid’s Tale. You can watch new episodes of that right away.

Hulu with Live TV is simply an upgrade of traditional Hulu.

Hulu Live TV offers several compelling additions beyond Hulu, which is what gives it a higher, yet still reasonable, price tag of $39.99 per month. Here’s what you’ll get with Hulu with Live TV that you won’t get with just Hulu:

We go into depth on Hulu with Live TV channels below but for now, just realize that Hulu Live gives you the ability to watch (and record) more content as well as to stream it on multiple devices, than straight up Hulu will.

If watching sports on ESPN, FS1 or catching the latest HGTV shows when they air is important to you, or being able to record content so that you can watch it when it’s convenient for you matters to you, Hulu with Live TV could be well worth the additional $32 per month.

Hulu Plus vs. Hulu Live TV

It’s easy to get confused when you start searching for Hulu reviews online. You’ve likely seen results for Hulu Plus reviews, along with Hulu Live TV reviews and Hulu with Live TV reviews. All three of these terms mean the same thing.

When Hulu first began offering content beyond what is now known as legacy Hulu or just Hulu for $7.99 per month, it called it Hulu Plus. Now, that upgraded service is marketed as Hulu Live TV or Hulu with Live TV.

So, whether you’re looking for Hulu Plus channels or Hulu with Live TV channels, you’re talking about the same thing.

Channel lineup is one of the most important factors to consider when choosing a streaming service. After all, you want to be sure you can watch your favorite shows.

The Hulu with Live TV channel lineup is comparable to Sling TV, as you can see in our Sling TV review.

So, what channels come with Hulu with Live TV?

The short answer is 60+ including some local channels. Exactly which local channels you get will depend on where you live but it will most likely include all the major networks. Hulu Live TV packages are full of many popular channels.

Your potential Hulu Live TV channel lineup could include:

That’s a big block of channels, so let’s unpack the Hulu with Live TV channel list by category.

Hulu Live TV’s channel lineup for kids is nothing to sneeze at and offers some content you won’t find on Netflix.

Hulu Live offers all the major news networks so you can watch the latest headlines live or record them on your DVR for later.

As you can see, selecting Hulu with Live TV gives you plenty of options, making it easy to watch and record all of your favorite shows. In fact, the Hulu Live TV channel lineup rivals all the other major streaming options out there like Sling TV, DirecTV Now and YouTube TV.

A Note About Commercials on Hulu with Live TV

Unless you’re in advertising, you probably hate watching commercials. Unfortunately, unless you’re looking at streaming platforms like Netflix or HBO Now, there’s no way to avoid them.

Traditional Hulu content contains commercials, unless you upgrade to the “commercial-free” version for an extra $4 per month. However, even then, Hulu will tell you that certain shows still contain limited commercials.

If you absolutely can’t stand to surf on your smartphone during commercials, it may be worth it to you to upgrade your total cost to $54.99 per month and get Hulu Live TV with an enhanced DVR.

Even at that rate, you’ll still be paying nearly half of what the average cable subscription costs.

What Devices Can I Watch Hulu Live TV on?

One of the things that makes Hulu with Live TV so popular is how easy it is to access. It’s very likely that you can already watch Hulu Live TV with what you already have in your home.

All you need is to put the Hulu app on your device and you’re ready to go.

Hulu Live works with all of the following devices:

If you just have a desktop computer in your home, you can watch Hulu with Live TV on it easily through any web browser including Google Chrome, Edge, Firefox, and Safari.

If you have a Samsung smart TV in your living room, you can likely watch Hulu with Live TV on it. This is one of the ways we can watch Hulu Live TV in our house. We just navigate to the apps section of our Smart TV menu and search for Hulu. After installing the app we simply launch it and go.

If you don’t have a smart TV but do have one of the following gaming consoles, you can watch Hulu with Live TV on it as well:

How Reliable is the Hulu with Live TV Platform?

We’ve enjoyed Hulu for years and have never experienced buffering or quality issues with its platform.

Hulu redesigned its app for Apple TV, Chromecast, iOS and Android operating systems, ensuring that it would work seamlessly with them.

Another plus for the design of Hulu with Live TV is that it is consistent across platforms so that no matter what kind of device or operating system you are watching it on, your experience will be the same. This is a small thing that makes a big difference in the ease of use and an enjoyable, hassle-free experience.

Whether you want to watch Hulu with Live TV on your smartphone, tablet, computer, or TV, you will see the same colors, menus and clarity.

Using Hulu with Live TV is pretty easy. It allows you to set up different profiles, so that if you have kids like us, your content comes pre-filtered for age and preference.

After you choose your profile, the home screen loads with featured content and shows that Hulu thinks you will like, as well as shows you’ve been watching.

There’s an easy to see “Keep Watching” column that makes it a breeze to find the latest episode of your show fast.

You can also search by category like “horror,” “kids,” “comedy,” “Hulu originals” and more. Each click leads to a set of clickable submenus to guide you through the content.

The only downside is that you can’t get back to the home screen with one click. You have to back click multiple times to get all the way back. More than once, I’ve made the error of clicking the home button on my Fire TV remote only to boot myself out of the Hulu app.

For an otherwise, technically adept and easy to use service, this is one thing we hope Hulu with Live TV will add to its interface soon. 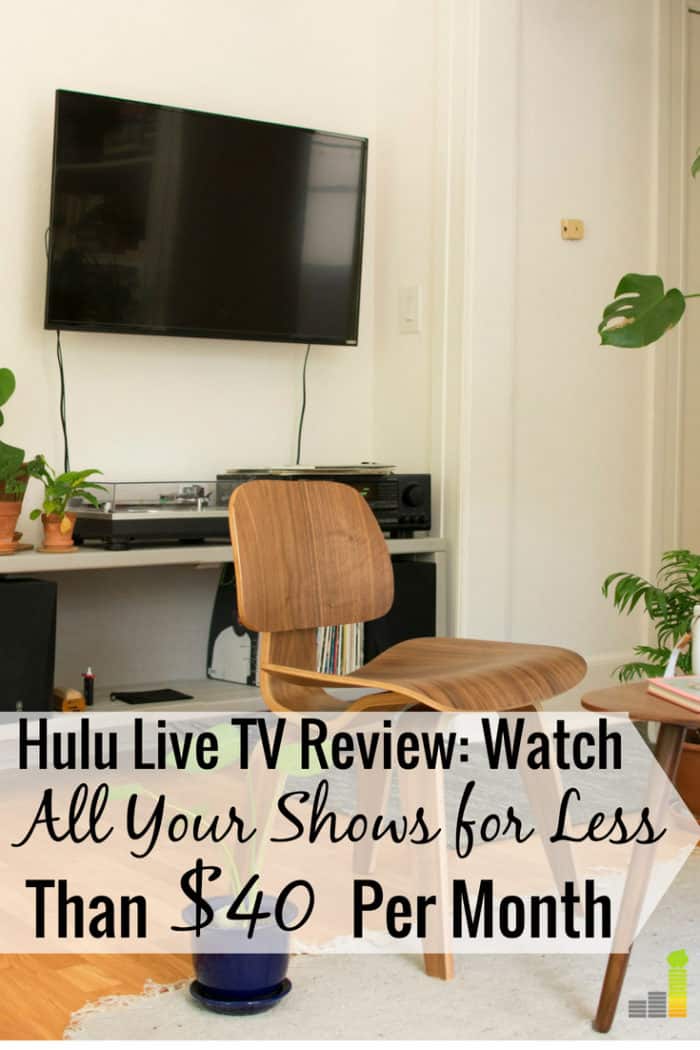 Does Hulu with Live TV Include DVR?

The quick answer to this question is, yes.

Hulu with Live TV comes with a DVR feature that allows you to record up to 50 hours of content, which is included in the $39.99 monthly charge.

As mentioned earlier, you can choose to upgrade your Hulu with Live TV subscription to the enhanced DVR option, which gives you two critical abilities:

The enhanced DVR option will cost you an extra $14.99 per month, bringing your total Hulu with Live TV cost to just under $55 per month.

With the average cable contract costing double that, it makes Hulu with Live TV an attractive option, even at its most expensive package level.

If you are looking for a solid streaming service with good functionality, plentiful channel lineup that includes all of your favorite sports, news, lifestyle, and major network TV shows, there’s not many better options out there than Hulu with Live TV.

One advantage that Hulu with Live TV has over other streaming services like DirecTV Now and Sling TV is the ability to record live TV shows on the included cloud DVR functionality.

There’s no clunky box. All your favorite shows go into the cloud and wait there for you to watch them. Hulu with Live TV is a solid option to consider if you want to cut the cord.

If you’re not sure whether or not you’ll like the service, try it now risk-free with Hulu’s free 7-day trial.

Have you used Hulu or Hulu with Live TV? What did you think of its channel lineup and viewing experience? Do you use a different streaming service? Do you still have a cable subscription? What is keeping you from cutting the cord?