I know you’re here to read about Hulu vs. Hulu Live. Before I jump into how to watch your favorite Hulu shows, I want to share a little story.

The other day while I did something I almost never do anymore. I went shopping. As I killed time waiting for my kids to finish up an activity, I browsed through my favorite stores’ sites.

Finding something I really wanted, I bought it. Without any remorse and no worrying about where the money would come from.

I could do this because I had an extra $80 lying around. That’s money I used to spend on cable. But since we cut the cord, I now have some monthly play money that I can use however I want.

What does that have to do with Hulu vs. Hulu Live and how to watch Hulu shows?

Cutting the cord is the starting point for getting the Hulu shows you want and putting more money back in your pocket. That’s money you can save; use to pay down debt; put towards financial goals and any lots of other things.

When it comes to cable or Hulu, the answer is Hulu. Or any other streaming provider, really. There are many. That’s a good thing because it means more choice for us.

What I like most about Hulu is that it puts most of my favorite content in one place. I can watch the shows I like pretty easily and the price is right.

With that said, let’s jump into which option is best for you.

Around since 2007, Hulu has had 12 years to perfect its content and viewing experience. It started out free, then moved to a low monthly fee. Now, it offers two streaming options – Hulu and Hulu Live. Differences between the services include:

Which one is best for you depends on what you want to watch.

It’s like having Netflix AND cable for reasonable fee and no contract. You can cancel, pause or change either service any time with no penalties or fees.

What Comes With Hulu Basic?

Hulu is similar to Netflix and Amazon Prime. It’s a robust library loaded with on-demand content to enjoy. Hulu Basic (or just Hulu) is its most popular plan. That’s likely because it’s only $5.99 per month.

You can stream Hulu TV shows, Hulu movies, Hulu free movies and many shows from lots of different networks anytime, anywhere. All you need to watch Hulu is a smart TV, laptop, tablet or smartphone.

Unlike Netflix and Amazon Prime though, you will have commercials on Hulu. In fact, if you’re looking for Hulu without commercials, it really doesn’t exist. If you’re used to watching TV, you likely won’t mind the commercials.

In fact, we’ve had Hulu for some years now and feel that overall, there are a bit fewer commercials than what you’d see with live TV.

For just $5.99 per month, you get access to a lot of TV shows and movies. While there’s simply too much content to catalog in this post, here’s a sampling of some of what comes with a Hulu subscription.

TV Shows and Movies on Hulu

There are more than 1,750 TV shows on Hulu, including:

There are over 1,500 movies on Hulu, including:

If you’re looking for Hulu free movies, all of the content on Hulu comes with your subscription, so you won’t have to pay extra for any of them.

What Comes With Hulu Live?

The short answer is live TV.

In fact, the difference between Netflix and Hulu is that with Hulu Live you get live TV. It’s just like cable, but without the nasty contract.

Hulu Live costs $44.99 per month. That’s less than half the cost of cable.

It’s better than cable because you get everything that comes with basic Hulu plus a whole lot more.  The Hulu Live TV channels list is extensive. There are nearly 70 channels, including:

Those are just the highlights. Hulu Live delivers the best of cable and on-demand content. You get live TV of course, but you also get access to past seasons of your favorite TV shows. With Hulu Live, you get:

Speaking of add-ons, there’s more than just content add-ons that you can use to customize your Hulu experience. There’s tech add-ons too.

If you want premium channels beyond the nearly 70 that come with Hulu Live, you can add:

You can also add one of two packages:

You can also upgrade your DVR and screen bandwidth. Hulu Live includes:

But, for $14.99 per month, you can sign up for Hulu’s enhanced cloud DVR add-on, which includes:

If you watch a lot of live sports, you may appreciate the extra DVR storage. If you want to end fighting over the remote in your home, you’ll love the unlimited screens.

The best part about Hulu Live add-ons is that you can cancel them at any time. There’s no contract, fees or pressure.

Hulu Live makes it easy to get exactly the content you want at a reasonable price.

Can You Watch Hulu Original Shows Without Hulu Live?

Hulu originals are one of the perks of paying for Hulu. Whether you choose Hulu or Hulu Live, you will get all Hulu original movies and Hulu TV shows.

Like Netflix, Hulu has invested a lot of money in original content. Sometimes, it picks up popular shows, like The Mindy Project, that networks cancel. The Handmaid’s Tale is its most decorated original show. Hulu originals you get with a subscription include:

You don’t need Hulu Live to watch any of these shows. A Hulu subscription for $5.99 per month gets you access to all Hulu originals. 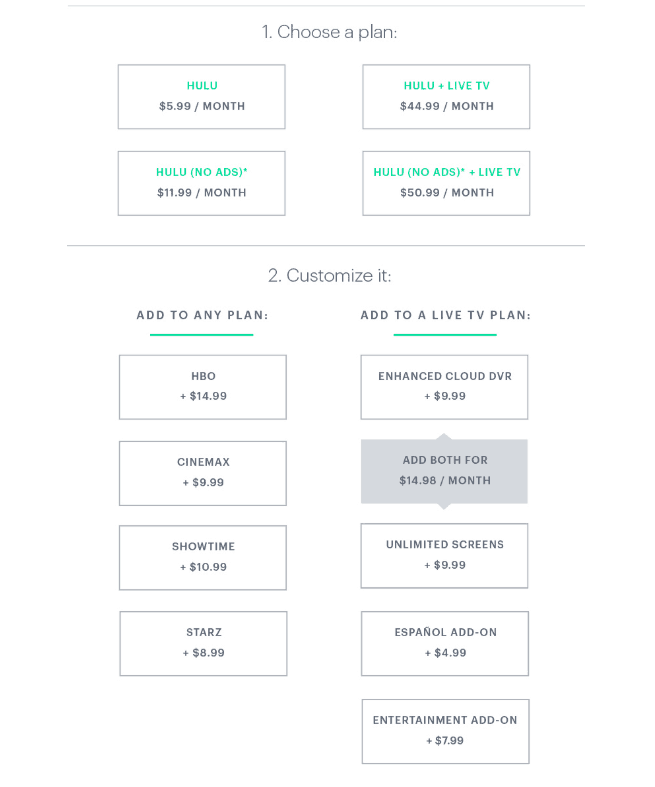 Hulu Live also includes a no ads option. It costs $50.99 per month and still includes ads during live streaming content.

What Devices Can I Watch Hulu On?

I’ve even watched it on my phone while waiting to catch a flight in the airport. Super simple. Stream Hulu on:

Watching Hulu on Amazon Fire TV Stick is our favorite option. We travel a lot and like taking the Fire Stick with us. We can plug it into any TV with an HDMI port and watch our favorite shows. All you need is a Wi-Fi connection.

Hulu Plus vs. Cable

If you still have cable and are trying to decide if Hulu Live will work for you, consider your budget and viewing habits.

What shows and movies do you watch? Do you love TV? Are there prime time shows you don’t want to miss? If you answered yes, Hulu Live is for you.

You won’t notice a difference from cable. Except for the cost, of course. You’ll pay a lot less to keep watching your favorite TV shows.

Other benefits of Hulu Live over cable is that you can pause, change or cancel your service any time. No fees. No penalties. You can also try Hulu Live for free for a week to see if you like it before cutting the cord.

If you’re more of a movie buff, try Hulu basic for free for a month. Should you like it, great, but if not, Netflix might be a better option.

Maybe you like TV, but find you mostly watch shows on the major networks (ABC, CBS, FOX, and NBC). We’re like that. Try Hulu basic for $5.99 per month and buy a digital antenna, like the Mohu Leaf 50, on Amazon.

We bought a digital antenna and love it. Clarity is great. The price is even better. One time fee gets you free network TV for the life of the antenna.

There are lots of ways to watch local TV channels without cable.

If you’re worried about getting your local channels without cable, don’t. It’s no reason to keep cable. 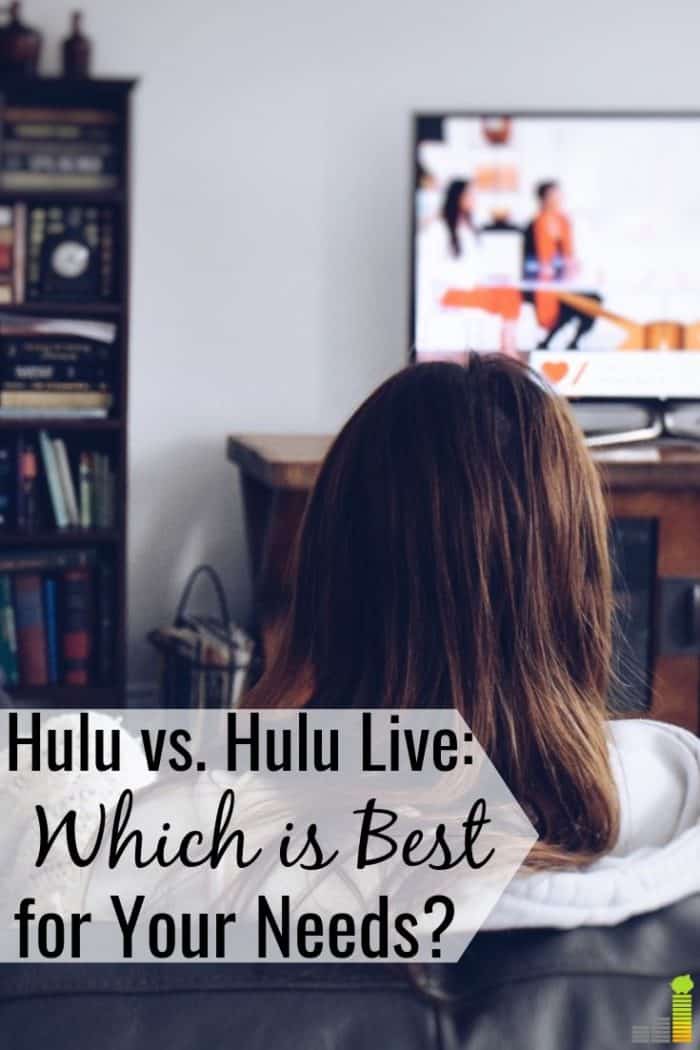 If you’re looking for a great streaming service that fits any budget, Hulu is it. If you don’t need live TV, Hulu basic for $5.99 can’t be beat. Add a digital antenna and you can watch your favorite local network shows live.

Have you tried Hulu Live? Do you like watching live TV? What channels do you wish you could get without cable? What’s keeping you from cutting the cord?

The post Hulu vs. Hulu Live: Which is Best for Your Needs? appeared first on Frugal Rules.