If you’ve come to this post to try to figure out which is better – Hulu vs. Sling TV, you’re probably already woke to benefits of cord cutting. I know that’s how I felt when I began comparing streaming services.

For a long time, I stayed put in our cable contract. I remember signing a two-year contract so I could get NFL live. I got all the NFL games, but I also got saddled with a hefty fee when I decided cable was just too expensive.

A few years ago, when we finally cut the cord, we were paying $110 per month for DirecTV. Switching to a streaming service saved us $80 per month. Now that we’ve cut the cord on cable, we’re never going back. We watch our favorite shows for a lot less.

If you’re done with cable, our review of Sling vs. Hulu will help. We’ve tried both services and break down the differences and benefits of both so you can pick the one that fits your family.

If you’ve narrowed your choice to Sling TV vs. Hulu, you’re in a good spot. You can’t go wrong with either service. Sling TV and Hulu Live are the two largest streaming providers. Generally speaking, they:

We love the convenience and savings that both Sling and Hulu provide. Which one is best for you depends on what you watch and how you plan to use the service.

Price is one of the most important factors when picking a streaming service. We are trying to spend less than cable, after all! Sling TV has a totally different pricing model than Hulu Live, so comparisons can be confusing.

This Hulu vs Sling price chart helps, and we’ll go over what comes with each package below.

While Hulu costs more, it includes the most content. Not only does Hulu Live come with more channels than Sling TV, it has more on-demand content.

Live TV, all of Hulu’s original content, and past seasons of many popular TV shows are included with Hulu Live.

If you want ESPN, choose Sling Orange. Sling Blue contains many of the channels as Sling Orange, but NOT ESPN. Instead, with Sling Blue you get Fox Sports, FS1, FS2, and the NFL Network.

If you want everything Sling TV offers, choose Sling Orange + Blue. The price is higher, but you get all the sports channels Sling offers.

As we started mentioning above, Sling TV offers less content in its base packages than Hulu Live, but more customization with channel add-ons.

When you look at Sling vs. Hulu, Hulu Live is the closest to cable. It’s better than cable for two main reasons:

Hulu Live channels include all the major networks (ABC, CBS, FOX, and NBC) plus other popular networks like:

Variety makes Hulu Live a great cable alternative and one of the best ways to watch ESPN without cable. Hulu also offers two channel packages that you can add to your base subscription:

Sling TV is more customizable than Hulu Live, thanks to its many extra channel packages. Whereas Hulu offers two, Sling TV offers ten.

Popular channels available through Sling TV include the following:

The most important thing to remember when looking at Hulu vs. Sling channels is that Hulu Live offers everything in one package, for one price – $45 per month. Sling TV has three channel packages that vary, mostly depending on whether or not you want ESPN.

You can tailor your content to what you want with Sling TV, but that customization comes at a cost. Sling TV add channels are generally an extra $5 per month.

Through its many add-on channel packages, Sling TV makes it possible to cobble together the channels you want most, which is great.

Keep an eye on how much that customization will cost you and be careful not to chew up too much of your savings with add-ons.

It’s easier to get local channels on Hulu. Major networks ABC, CBS, FOX, and NBC are all included in Hulu Live.

Save $30 on Your Cable Bill With Trim
Trim is a little app that makes a big difference in your bank account. You just connect it to your bank account so it can find memberships and subscriptions that you don’t use and negotiate lower rates for you.

To get local channels on Sling TV, you have to live in the right place. Even then, it’s only some of them. FOX and NBC are included with Sling Blue in some markets. Depending on where you live, you might be able to receive ABC and CBS included at no cost.

If local channels matter to you and you’re leaning towards Sling TV, we recommend buying a digital antenna to ensure you are able to watch all your local channels.

The best part about using a digital antenna is that after you buy the antenna, all your local channels are free.

Sling TV knows this. Maybe that’s why they offer a free digital antenna as a sign on bonus at times.

After cost and channels, the next thing most readers want to know about Hulu vs. Sling is what features are included in each. DVR, number of screens, channel guide, and original content are the features we’re asked about the most, so those are addressed below in this table.

As you can see, Hulu Live beats Sling TV on DVR, number of screens, and original content. Sling TV can be frustrating on the DVR and screens options as it depends on what package you select.

Being able to stream on more than one screen at a time is essential if you have multiple TVs or someone in your home who travels and wants to stream Hulu Live while they’re away from the house.

When it comes to channel guide for Hulu vs. Sling, both are great. We thought Hulu Live’s guide was easier to search and filter by genre, series name, and network.

Both Sling and Hulu have cable-like guides that you can browse to see what’s airing live as well as what’s coming up later on in the day.

Readers new to streaming often worry about how they will watch their favorite shows without cable. They wonder what devices work with Sling TV and Hulu Live. The great news is that all of the major streaming services work with all the major devices.

Both Hulu Live and Sling TV work with all of the following devices:

The Amazon Fire TV Stick, Chromecast, and Apple TV are three examples of devices you connect to your TV to help you access all sorts of apps, including Sling TV and Hulu Live.

If you want to watch Hulu Live or Sling TV on your computer, tablet, smartphone or laptop, you won’t need any of those things just mentioned. You just go to Hulu.com, for example, log in, and start watching. 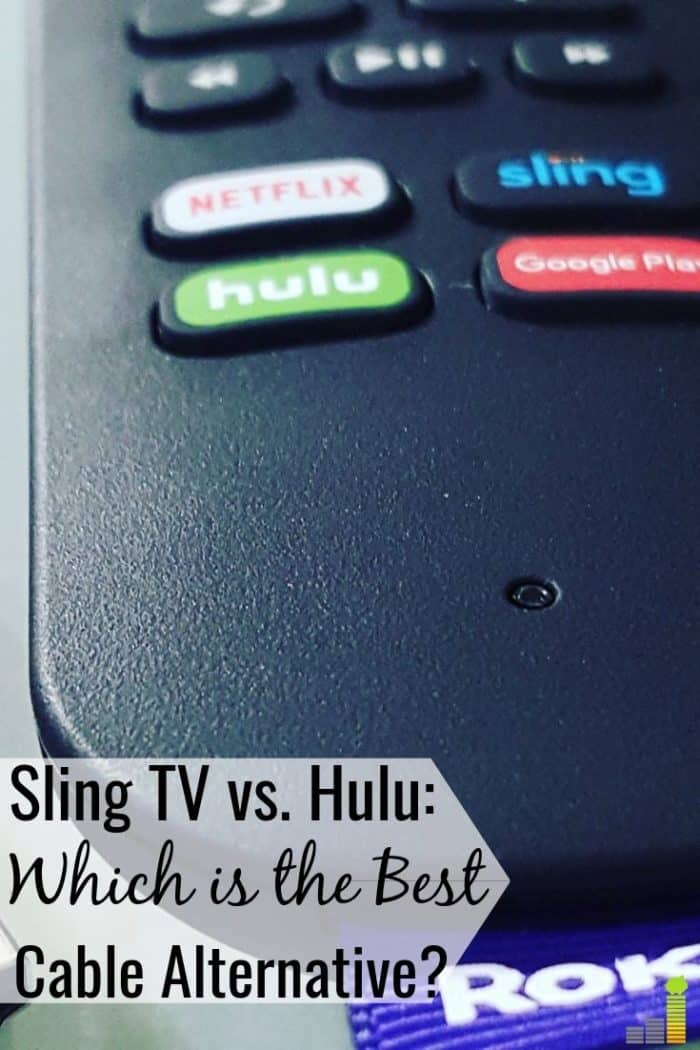 Hulu vs. Sling TV: Which is Better?

If you’re in search of a streaming service that’s close to cable, nothing beats Hulu Live. For a LOT less than cable, you can enjoy live TV plus an incredible catalog of on-demand shows and movies. Hulu Live includes:

The only downside is that it runs $45 per month. While this is a huge savings over cable, it is more than Sling TV, which rings in at $25 per month for two of its three base packages.

As you decide which service is right for you, consider what channels you watch most. List out your top five or ten channels and look at Hulu vs. Sling to see how much you’d need to pay to get them. You may be able to get everything you want in one of Sling TV’s $25 per month packages.

If you’re leaning towards Sling Orange + Blue, consider Hulu Live instead as for $5 more per month, you’ll get more functionality, content and local channels.

Still not sure whether Sling TV or Hulu is best? Click the links below to try each service. After the trial period ends, sign up for the one you liked most.

Whether you choose Hulu or Sling TV, you’ll save a ton of money each month by cutting the cord on your overpriced cable subscription.

How much do you pay for cable each month? What streaming provider is your favorite? What’s the one thing keeping you from cutting the cord?

The post Sling TV vs. Hulu Live: Which is the Best Streaming Provider? appeared first on Frugal Rules.