I hear people complain all the time about the cost of their cell phone plan. With as much as we rely on our phones these days, having a reliable phone plan that doesn’t cost a fortune is essential. With Ting, you no longer need to spend $100+ per month to receive dependable service.

Thanks to competition, it’s possible to spend significantly less without compromising quality. Providers like Ting Mobile allow you to spend $25, or less, per month for the same level of service you receive from the major carriers.

That’s right, you can get service for under $25 per month. If you have service through a major carrier, that represents significant savings you can apply towards other needs in your budget.

If you want to save money on your cell phone bill, Ting Wireless is worth a look. In this Ting review, I’ll cover their plans, rates, and how their service measures up to the major carriers.

Ting is known as a Mobile Virtual Network Operator (MVNO). An MVNO does not own their own cell towers. Rather, they rent tower space from one of the four major carriers – AT&T, Sprint, T-Mobile, and Verizon.

Since MVNOs do not own their own towers they’re able to operate at a significantly lower cost than the legacy carriers. They pass these savings onto you as a customer, allowing you to pocket the savings.

The benefits don’t stop there. Ting, like other MVNOs, does not have contracts, so you can leave when you wish. Combine that with the savings and service on a legacy carrier’s network, and a quality MVNO becomes an easy decision to save money.

Ting operates on two networks – Sprint and T-Mobile for both talk and text. The provider has headquarters in Ontario, Canada, and Starkville, Mississippi, but provides customer service entirely online.

Do you want a cheap phone plan that offers quality service? Our Ting review shares why they’re worth considering for your needs.

Customers can sign up with Ting directly from their website. If it’s easier, you can choose to use the Log in with Amazon feature on their site.

Connecting a Ting profile to an Amazon account would leave one less login credential to remember. It also makes it easier to purchase a phone through Amazon.

Once you create a new profile, you have the option to buy a new phone or bring your own device.

The dashboard is where to go to find account history, account settings, usage alerts, and welcome video.

Ting Wireless has a flexible phone plan system where you can customize a plan to your needs. They actually don’t refer to it as a ‘plan’ because it’s truly dependent on your personal usage and preferences.

Ultimately, you only pay for what you use per month. If you use less than planned during the month your bill reflects that in the final cost.

Bills consist of four sections: the number of lines, the number of minutes a customer will talk or text, and also the data they’ll need each month. According to Ting, the average bill on their platform is $23 per month. 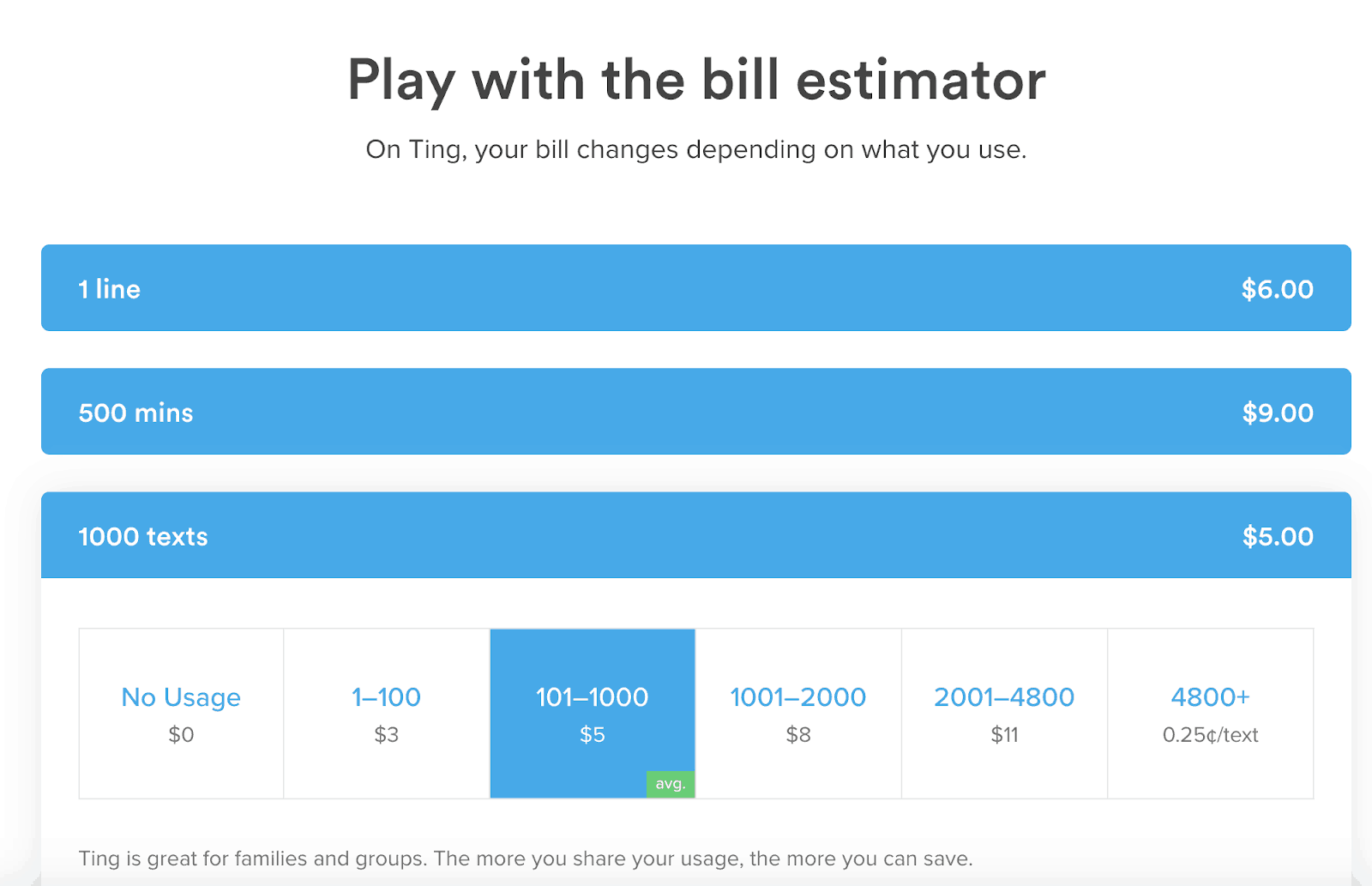 The low rates make Ting a flexible option for families to each have a cell phone at a reasonable price. Ting allows six lines and just for those six lines no talk text or data attached yet it would cost a family $36.

This makes Ting one of the best cell phone plans for families to consider.

Remember, you’re only charged for what you use during the billing cycle. If you use your phone less that month, the bill could be lower. The only guaranteed charge is the per line fee. Everything else can vary from month to month.

Another notable thing about Ting is the data usage feature. If you want an update on when you reach a certain number of texts or data, you can set that through the website.

Updates come via text which provides a quick and painless way to monitor your usage.

You will notice though that Ting does not offer unlimited plans. If you’re a heavy data user, for example,  it’s best to use Wi-Fi as much as possible.

Finally, Ting is one of the better MVNOs for international calling. You can make calls to the below countries with no additional charge, solely using your minutes.

Ting Mobile allows you to make calls to more than 60 countries. You can find those rates on the Ting website.

This Robot Makes Saving Money Easy
Trim is like a robot whose one goal is to save you money. The average Trim user saves $30 per bill! You can too. Trim connects to your bank account, finds ways to save you money on the memberships and subscriptions you don’t use and negotiates lower prices for you. Trim works with Comcast, Time Warner and more. Pay less and save more today with Trim.

Ting has a convenient feature that allows potential customers to look at the coverage map of both GSM and CDMA devices. That way, you can know how good the coverage will be in your area before signing up.

Many areas now offer 4G LTE service but that all depends on where you live. Regardless if you’re using Ting on a GSM or CDMA network, there will not be an extra charge for domestic roaming.

International roaming works on both networks. Customers must have an LTE device if they want to internationally roam on the CDMA network.

Bring Your Own Phone

One of the main benefits an MVNO is the ability to bring your own phone. Ting allows you to bring both Android and iOS-based phones. Ting customers have many options when it comes to compatible phones to use with your service.

The first step is to verify that your current phone works on the Ting platform. Ting has a compatibility feature online for customers to check if their device will work on the platform. All they need is the IMEI or MEID number.

If you don’t know how to find that besides looking on the back of their phone they can call *#06# and it will pop up all the needed information. After entering those numbers you’ll know if you can bring your own device.

Big-name phone manufacturers like Samsung, Apple, and Motorola make several phones that work on the Ting platform. As long as those phones aren’t tied to another company, it should work with Ting.

You can screen any other phone bought through a third party through the compatibility checker to see if it will work with the Ting network. When you bring your own phone, you need to purchase a SIM card from Ting for $9 to start service.

If you don’t have your own phone already, Ting has over 25 different models to choose from on their website. 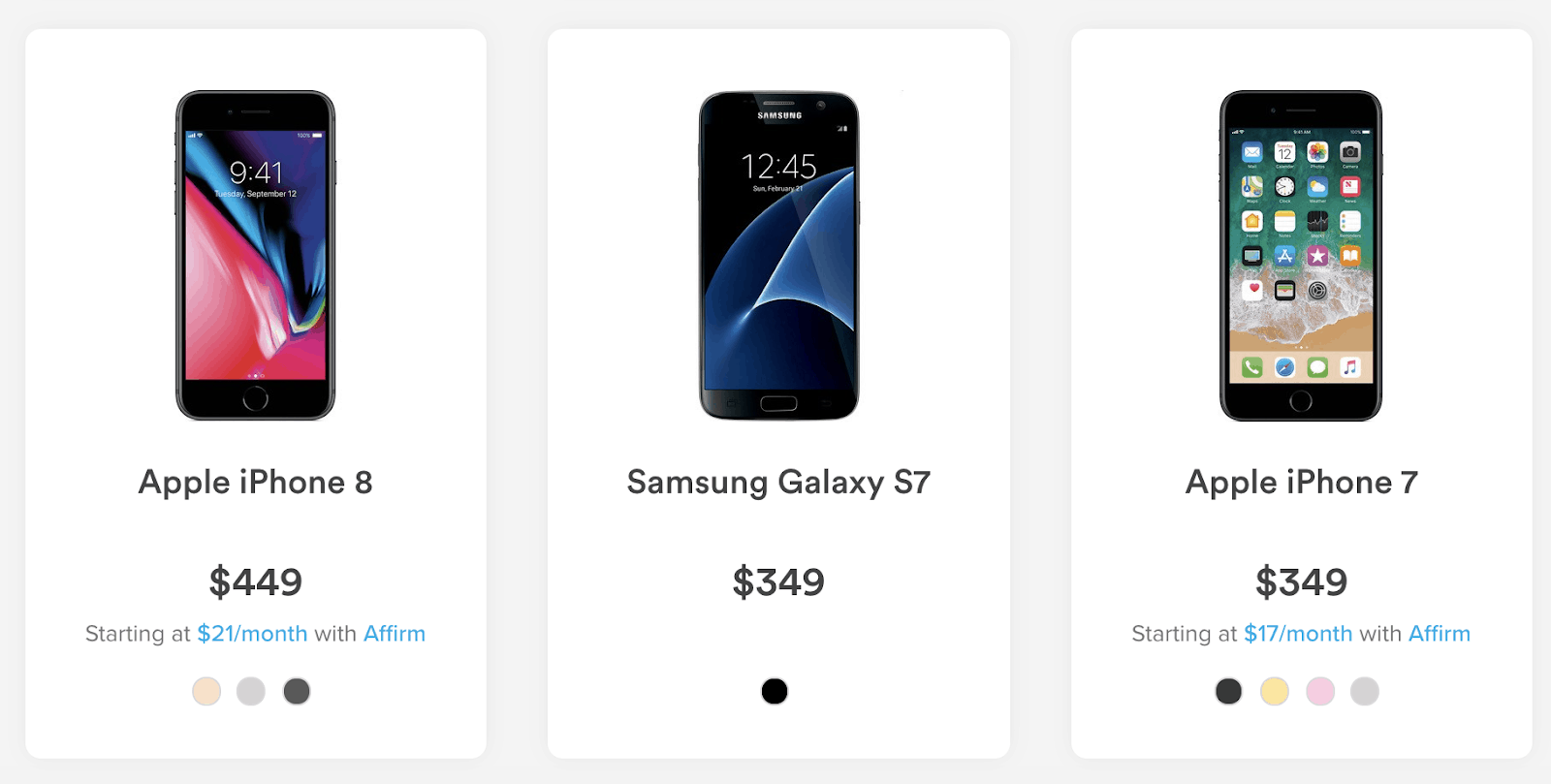 On the website, you can find popular phones like the Apple iPhone Xs Max, Samsung Galaxy S10e, and the Motorola Moto Z3 Play are just a few of the many options available.

Prices range from $1,099 to just $49 for the Alcatel Go Flip. Most devices have the SIM card included with the phone and customers don’t have to purchase them separately.

A few of their phones can be bought refurbished, but a majority of them are only available brand-new. Phones on their website are available for purchase in full or via financing.

Most of the phones Ting offers come with 32GB of storage, though they do carry some options with more or less space to fit your needs.

Ting does not tend to offer special promo codes, but Frugal Rules readers receive a $50 credit when signing up for service.

With the average bill being $23 per month, this allows you to effectively receive the first two months of service for free!

You don’t need a special code for this Ting promo code. It’s available to all Frugal Rules readers when signing up for service through our site.

Pros and Cons of Ting

No cell phone provider is perfect. Choosing a provider is important, so take a look at everything they offer before deciding. Below are the pros and cons of Ting.

Ting offers dependable service at a low cost. Not all MVNOs offer service on two networks, though Ting does. This helps set them apart from other carriers. 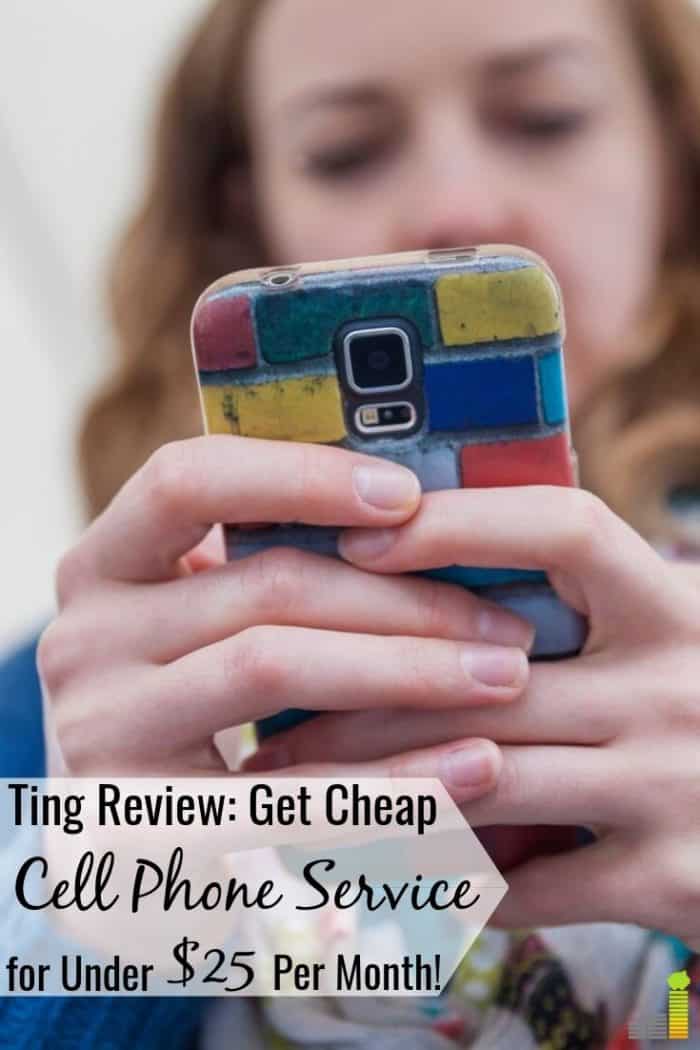 Ting is a great option to consider if you’re looking to change phone companies. The compatibility checker makes it simple to find out if a device works in their network.

Ting is family-friendly, and your individual service bill could average just $23 per month, which is an awesome deal. Paying only for the talk, text, and data that you use is a great benefit to have instead of committing to a plan that charges high rates and fees each month.

The post Ting Review: Get Cell Service for Under $25 Per Month! appeared first on Frugal Rules.