My parents, who still get Netflix discs by mail, surprised me recently when they asked, “What is the Amazon Fire Stick?” I took it as a sign they were ready to move into the digital age. After explaining how an Amazon Fire Stick could help them watch more shows on Netflix and other streaming services, they bought one. I helped them set it up when it arrived the next day.

Now, they’re asking Alexa to show them murder mysteries. My parents love their Amazon Fire Stick and it works well with their smart TVs and other Amazon devices. If you, like them, want to start streaming content on your TV at home, but aren’t sold on Amazon, discover Fire Stick alternatives here.

We cut the cord on our expensive DirecTV contract years ago and found the Fire Stick had almost everything we wanted.

If you are an Amazon Prime member, like we are, you can watch Amazon Prime movies, TV shows and original content on a Fire Stick.

Using a Fire Stick is easy. Plug it into an HDMI port on your TV, connect it to your Wi-Fi network and use the included remote to start watching content. Like other streaming devices, the Fire Stick is a gateway to all kinds of content.

Most providers with apps, like Netflix, Hulu, SlingTV, and Philo, are on the Fire Stick.

We have an Amazon Echo as well as a Fire TV Recast and like using Alexa to turn on NBC. It’s pretty slick.

Still, Amazon Fire Stick isn’t the only player in the streaming media game. Lots of alternatives are worth considering.

If you’re making the switch from cable to streaming, it’s worthwhile to look at these best Fire Stick alternatives before making your choice.

Both the Fire TV and Fire Stick support dual-band Wi-Fi, but the Fire TV accommodates the 802.11ac standard. These differences mean the Fire TV delivers faster download and upload speeds.

It can also be expanded for additional storage beyond the included 8GB.

Having both in our home, we’ve found the Fire TV a good fit for our main TV and use the Fire Stick on our secondary TV. We also like the portability of the Fire Stick and often take it with us when we travel.

If you want to learn more about the Fire TV, check out our Amazon Fire TV review.

Roku is one of the most well-known Fire Stick alternatives. When you compare the Amazon Fire Stick vs. Roku, there are many similarities. Roku features include:

There are two differences worth noting: unlike the Fire TV, there is no Ethernet port and unlike both the Fire TV and Fire Stick, Roku is limited to Wi-Fi 802.11n. This may result in slightly slower speeds, but overall shouldn’t be too noticeable.

The main difference between the first two models is a voice remote and an included shortcut to Walmart’s streaming service, Vudu, on the Premiere+ home screen.

The Roku Ultra is similar to the Fire TV Recast and comes with a powerful quad-core processor and lighting fast wireless connection capability. Other features of Roku Ultra include:

Like the Fire Stick, Roku is easy to set up and use. Its intuitive menu interface makes it easy to find what you want to watch, fast.

Amazon and Apple compete on many fronts. Their streaming media players are no exception. Comparing the Amazon Fire Stick vs Apple TV reveals two powerful devices. Like the Fire TV, Apple TV is a small set-top box.

The processor and Bluetooth power on the 4K version are a bit faster as well.

If you are an Apple family, the Apple TV models will deliver a seamless fit with all the other tech in your home. The audio and video resolution is stunning and you’ll have a hard time finding a streaming service not compatible with Apple TV.

Like Apple TV and Amazon Fire TV, Chromecast is Google’s answer to the streaming media question. Google Chromecast features include:

One important difference to note about Chromecast is that it does not include a remote. You have to use your phone, which can be inconvenient and annoying, depending on your phone. If you like to flip channels, you may not be happy with Chromecast.

Sometimes, the audio will work, but not the video. At other times, video will display with no sound. The bottom line is that the two don’t play well together.

Still, where Chromecast shines is its plug and play ability.

Just plug it in to your TV and start streaming. Like Apple Siri and Amazon Alexa, if you have Google Home, you can play shows and change channels with your voice.

Nexus is another streaming media player from Google. As far as Fire Stick alternatives go, the Nexus is to Chromecast what Fire TV is to the Fire TV Stick.

There are a few differences that cause the Nexus to slip a bit in comparison to other Fire Stick alternatives. First, it has less storage than other alternatives to Fire Stick. The remote looks nice, but feels a little flimsy.

Despite its shortcomings, the Nexus is a solid streaming media player that connects to your TV with just an HDMI cable and delivers one of the most powerful options on the market.

Unlike other Fire Stick alternatives, Raspberry Pi is the only one you might mistake for a delicious dessert. If you’re a programmer or computing enthusiast, you’ll gobble up the Raspberry Pi.

More like a tiny desktop computer than a streaming media player, the Raspberry Pi delivers all the functionality you need to stream your favorite content. Features include:

If you are looking for something that will work as a media player right out of the box, don’t get the Raspberry Pi. If you want to turn your bathroom mirror into a TV set, this is the streaming device for you.

It also tends to overheat, so you’ll want to plan for an active cooling station to help it run well.

There are four Shield TV models, ranging from a basic model to a Gaming Edition to a Smart Home Edition that includes a SmarThings hub. The Shield TV Pro has a 500GB hard drive, but you’ll pay for that power.

The highlight of the Shield TV is its power. If you’re an Android home, this could be one of the best Fire Stick alternatives for you.

Having a streaming media player is half the equation. Fire TV and the Fire Stick alternatives we’ve discussed are the equipment. You still need the content.

Thankfully, there are just as many, if not more, streaming services as there are media players. If you want to cut the cord, these are some of the best cable alternatives available.

Hulu Live channels are diverse and include popular networks like ESPN, Disney, HGTV, and CNN.

Hulu Live subscribers also enjoy Hulu’s massive on-demand library of content. That repository includes Hulu original programming like The Handmaid’s Tale and Castle Rock and back episodes and seasons of many network shows.

The legacy version (or non-live) of Hulu is considerably less, $5.99 per month, and includes Hulu’s on-demand content. While you will enjoy all Hulu original programming, not as many back episodes of network shows are available.

You can try Hulu Live free for 7 days to see if you like it before signing up.

Sling TV is another streaming service that has been around for a long time. The streaming service comes from the popular satellite service Dish. There’s no contract and no fees and two ways to watch all your favorite shows and sports.

Sling TV channels vary depending on whether you choose Sling Orange or Sling Blue. The big difference between the packages is ESPN.

If you want it, you’ll have to choose the Orange package, because Sling Blue has Fox Sports while Sling Orange offers ESPN channels.

At $25 per month, Sling TV is less expensive than Hulu Live and quite a bit more affordable than cable. The channel guide is easy to use and like Hulu Live, Sling TV works with all the Fire Stick alternatives mentioned here.

Not sure if Sling TV is right for you? Try Sling TV free for 7 days and find out.

If you love lifestyle and entertainment TV, Philo may be the perfect cord cutting solution for you. Philo TV channels include:

The one downside to Philo TV is that it does not offer Fox, ESPN or any other sports channels. One way to remedy this is to buy a digital antenna like the Mohu Leaf.

With it, you can watch ABC, CBS, FOX, NBC, PBS and other over-the-air stations in your area.

Philo TV offers two channel packages. A base packages of 44 channels for only $16 per month and an extra channels package with a total of 57 channels for $20 per month. Either package offers huge savings over the average cable bill.

Try Philo TV risk-free for seven days with just your phone number. Unlike other trials, no credit card is required. 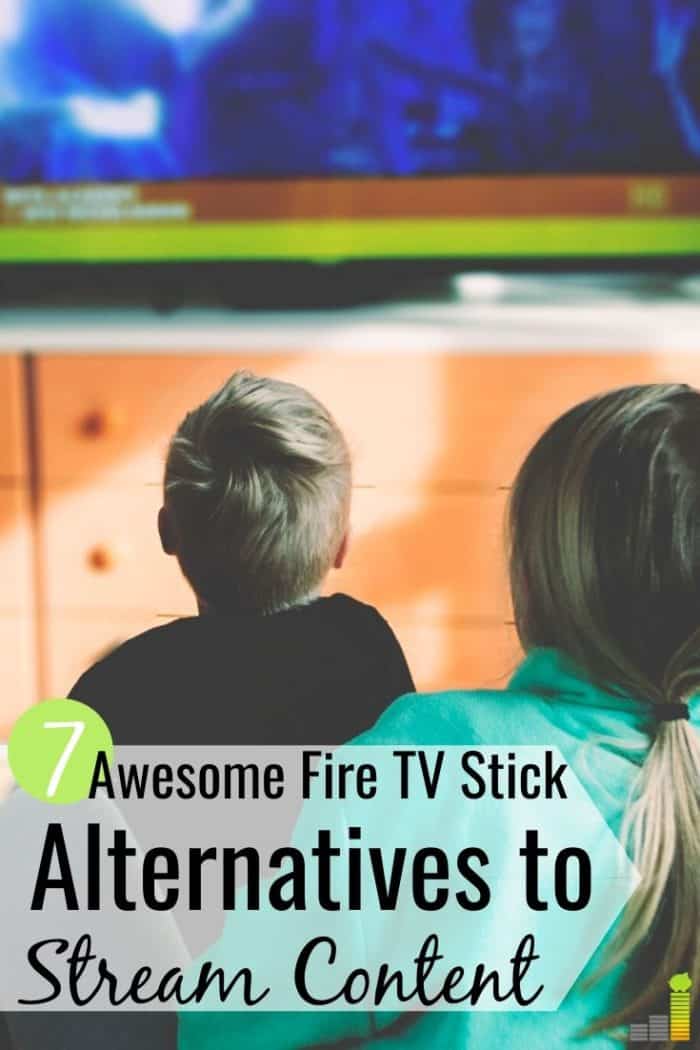 If you’re looking for Fire TV Stick alternatives, it may be that you’ve tried Amazon Fire products and haven’t liked them. Or, you may be looking for a lower priced alternative to the Fire Stick.

Whatever your reason, the bottom line is you have choices. That’s good news.

Roku Premiere, Chromecast, and Apple TV are the most similar to Amazon Fire TV Stick. If you like to tinker with computers, try the Raspberry Pi.

If you want something faster and with a bit more heft than a dongle device, try the Fire TV, especially if you already have other Amazon devices in your home.

Cutting the cord has never been easier, thanks in part to the abundance of media players on the market. When paired with an inexpensive streaming service like Hulu, Sling TV or Philo, you can cancel your cable bill with confidence.

If you pay the average cost for cable, you could save $80 or more per month. Just think of what you could do with that money!

Have you tried the Fire TV or Fire Stick? Do you have other Amazon products? What media players have you tried? Which are your favorites from this list of Fire Stick alternatives?