Free cars, gut-wrenching human interest stories and seeing Tom Cruise jump up and down on a couch are just a few of the reasons people love Oprah Winfrey. While she may not be on network TV every week, the OWN network has become a popular way to watch old episodes of the Oprah Winfrey show, as well as a lot of other content she curates.

When Oprah ended her show, she started a network – OWN, or the Oprah Winfrey Network. With exclusive content, scores of hardcore Oprah fans want to know how to watch OWN without cable.

If OWN is keeping you from cutting the cord, here are the best ways to watch OWN without cable.

Believe it or not, every week readers ask us how to watch OWN without cable. One of the reasons is that they love the programming on OWN and are afraid they’ll lose it if they cut the cord.

Thankfully, you can watch OWN network without cable.

Along with back episodes of The Oprah Winfrey Show, all its popular shows, including the following, are available without cable when you stream OWN (the Oprah Winfrey Network):

Not being able to watch your favorite shows is something cable companies often say to keep customers from cord cutting. Thanks to an explosion of streaming services like Philo, Hulu Live, Sling TV, and Netflix, it’s easier than ever to watch OWN network without cable.

How to Watch OWN Without Cable

Readers ask us all the time, ‘can I watch OWN without cable?’ The answer is yes.

The best way to watch OWN without cable is to sign up for a streaming service that has it. While OWN isn’t included in every streaming service, there are several popular ones, like Philo TV, that offer it.

Best of all, it costs a lot less than cable.

Here are our best answers for how to watch OWN without cable.

Started decades ago on college campuses, Philo TV features lifestyle and entertainment content at an affordable rate. For less than $20 per month, you get nearly 60 channels.

In addition to OWN, Philo TV channels include:

Unfortunately, what you won’t get with Philo TV is sports. Part of the way Philo TV keeps its rates so low is by not carrying ESPN or Fox Sports.

There are other ways to get some sports with Philo. With a one-time purchase of a digital antenna (like the Mohu Leaf, which we have and love), you can get all your local channels and watch NFL and college football games that way.

The average American pays $110 per month for cable. If you don’t mind giving up ESPN, Philo TV can put as much as $90 per month back in your pocket. Just think of what you could do with that money!

A low cost and great channel lineup make Philo TV one of the best ways to watch OWN without cable.

Try watching OWN on Philo TV free for seven days and start saving. It could be the best streaming solution for you.

More than double the cost of Philo TV, AT&T TV Now is another answer to the question of how to watch OWN without cable. AT&T TV Now packages start at $65. While more expensive than other streaming options, it’s still considerably less than cable.

If you aren’t familiar with AT&T TV Now, that’s because it just changed its name from DirecTV Now. When the communications giant bought DirecTV it eventually decided to rename that streaming service.

Learn all about the service in our AT&T TV Now review; highlights include:

One of the benefits of AT&T also owning HBO is that it is bundled in with the cheapest AT&T Now plan. If you’re looking for how to watch OWN without cable, AT&T TV Now isn’t your cheapest option, but it is less expensive than cable.

Try AT&T TV Now free for seven days and see what you think of the streaming service.

PlayStation Vue is another popular streaming service and excellent way to watch OWN without cable.

If you’re a gamer and already have a PlayStation gaming console, you may find PlayStation Vue the most convenient answer to the question of how to get OWN without cable. A few highlights of PlayStation Vue include:

Like AT&T TV Now, PlayStation Vue isn’t going to be the cheapest way to watch OWN without cable (Philo TV is), but it is an option worth considering.

It seems everyone is getting into the streaming business these days and YouTube is no exception. YouTube TV plans start at $50 per month and include about 70 channels.

In addition to OWN, you’ll find popular channels like Bravo, Food Network, and Travel Channel.

Unlike other streaming services, YouTube TV offers many local channels. There’s a good chance you’ll be able to stream your local ABC, CBS, FOX, and NBC station without a digital antenna if you choose YouTube TV.

The streaming service is compatible with all major devices including Apple TV, Amazon Fire TV, Chromecast, and Roku. YouTube TV lets you stream content on up to three devices or TVs at once and includes DVR service so you can record your favorite shows.

If you’ve not tried a streaming service before, you might be surprised to know you can also watch content on your laptop computer, tablet or smartphone.

This convenience is one of the reasons YouTube TV and the other streaming services mentioned here are becoming so popular with cord cutters. 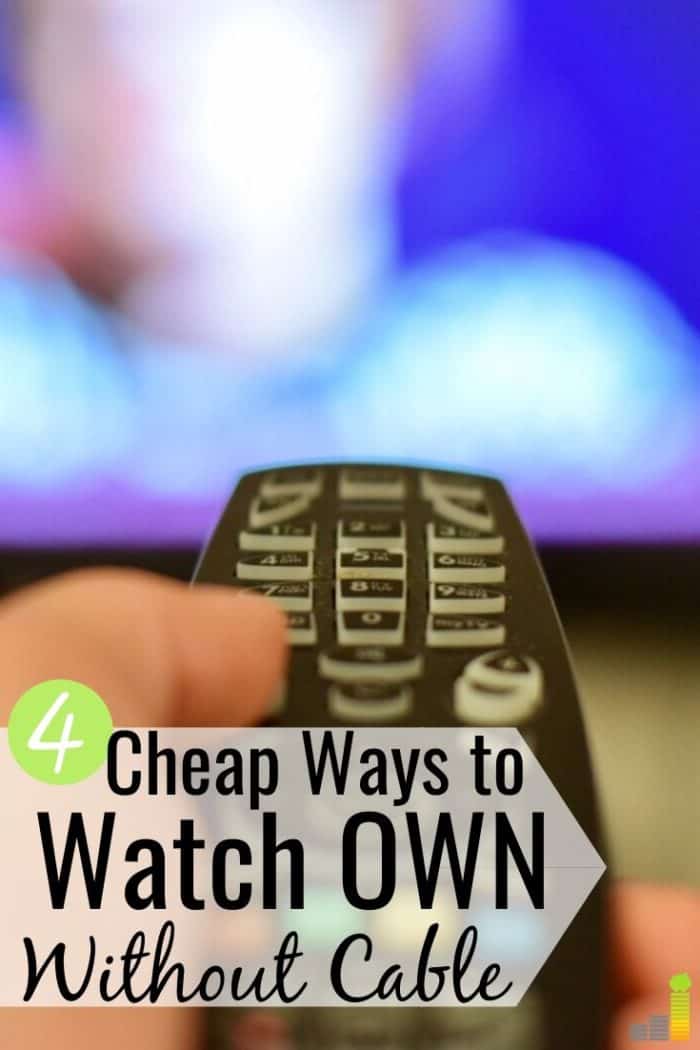 How to Watch OWN Online for Free

As is true of other networks, like CBS and NBC for example, OWN does let you watch some of its content online for free. There is an OWN app you can download to your tablet or smartphone and a website where you can watch OWN shows.

Unfortunately, you can’t watch all OWN shows for free. Unlocking all the content in the OWN app and on the website requires a login from a TV or cable provider.

As of right now, the only streaming service that lets you watch unlimited OWN content on its website or app is PlayStation Vue. If you are already leaning toward PlayStation Vue, that service may be the best answer for how to watch OWN without cable for you.

Just login with your PlayStation Vue credentials to watch both live and on demand content from OWN.

Can You Watch OWN on Apple TV, Chromecast, Fire TV, or Roku?

The simple answer is yes.

Not only can you watch Oprah Winfrey network on Roku, you can watch OWN on Amazon Fire TV, Apple TV, Chromecast, computers with Android operating systems, and tablets and devices with iOS.

If you are new to streaming, there are only two things you truly need to watch OWN without cable:

That’s it. Wi-Fi will make it possible for you to watch OWN without cable on your Smart TV and devices. There are a number of solid streaming platforms today, making it easier than ever to cut cable, save money and not give up your favorite shows.

How to Get OWN Without Cable: Bottom Line

If fear of losing OWN is keeping you in an expensive cable contract, it’s time to cut the cord. Choose any one of the streaming services reviewed here to watch OWN without cable and start saving.

If you don’t need to watch live sports, Philo TV may be the best way to watch OWN without cable since it starts at only $16 per month.

Whichever service you choose, you’ll spend less for OWN than you are with cable. Stop spending more than you need to and start saving today with one of these great options.

Do you still have cable? What is keeping you from cutting the cord? What are your favorite shows on the OWN network?

The post How to Watch OWN Without Cable appeared first on Frugal Rules.