Netflix vs. Disney Plus is a comparison many families, including mine, are making these days. Ever since news broke that a new Disney streaming service was coming, people have been wondering who has the best content at the best price.

Netflix vs. Disney Plus

Rather than diving deep into either service, we’re going to stick to a high level overview of Disney Plus vs Netflix. We’ll cover:

For the nitty gritty details of the Disney+ app, read our in-depth Disney Plus review.

You may not want to pay for both Netflix and Disney+, so you need to know which is the better deal.

A quick overview of features provides an at-a-glance view of what features come with each service.

As you can see, Disney+ is cheaper than Netflix. Its one subscription option offers nearly all the benefits and features of Netflix’s highest tier subscription.

You receive 4K streaming and up to seven profiles, for less than half of what it would cost you to get the same level of service from Netflix.

The one catch is the content, which we discuss next.

Do you like Star Wars? Are you a Marvel movie nut? Do you have kids?

If your answer is ‘yes’ to any of those questions, you will likely prefer Disney Plus’ content over that of Netflix. On top of Star Wars and Marvel movies, Disney+ content includes:

With more titles and original content, Netflix has far more to offer adults. Disney+ has 500 movies and 7,500 TV episodes.

Netflix dwarfs that with 4,000 movies and 47,000 TV episodes. While Disney+ has less content, overall what it does have is of higher quality.

If you like gritty dramas, crime serials or even adult comedies, you’ll want a subscription to Netflix.

It all depends on who will be watching and what they like to watch. If you’re subscribing to a streaming service mostly for your kids, you’ll want to go with Disney+.

However, if you’re looking for something for the whole family and which offers more robust parental controls, you may prefer Netflix.

Disney Plus vs. Netflix: Devices

Both Netflix and Disney+ are available on all major streaming devices, including:

Both the Disney+ and Netflix apps are free to install on the device of your choice. Once you sign up for a subscription, you can start watching content.

Disney+ benefited from Netflix’s years of trial and fine-tuning its user interface. Both streaming services are intuitive and easy to use.

When you launch either, a large image appears of a featured movie or series. Beneath that are “tiles” of additional content.

On Disney+ the first row beneath the featured image is of the brands on its network.

Beneath that you’ll see titles recommended for you, following by original content, titles you’re already watching or in the middle of, hit movies, and more. 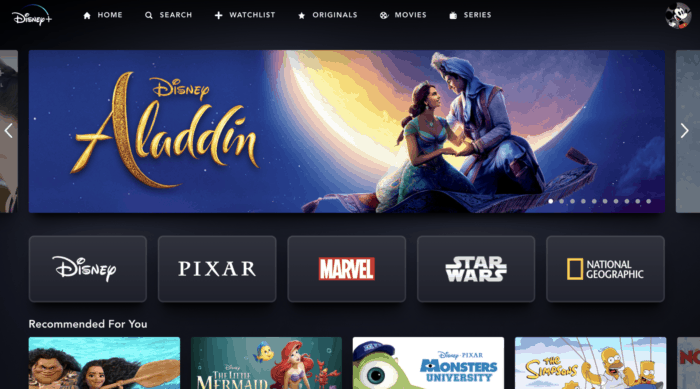 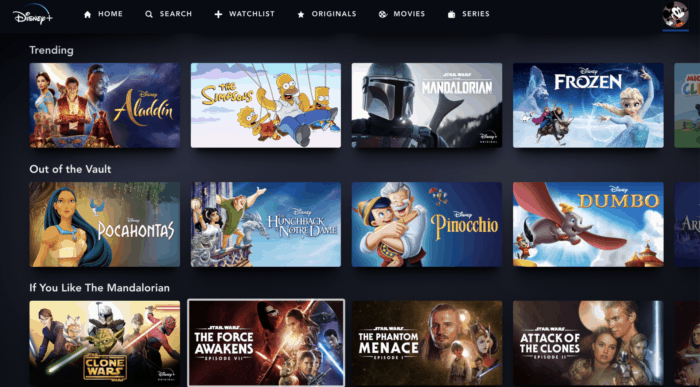 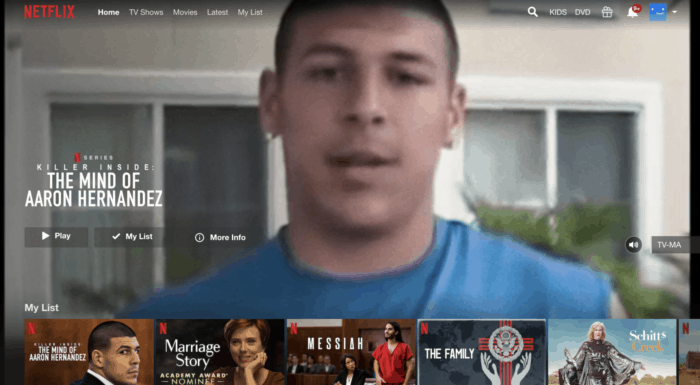 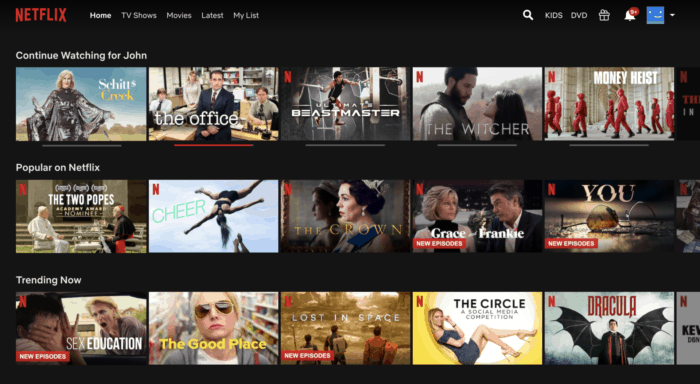 Both Netflix and Disney+ also offer a convenient search function that lets you type in any title you’re looking for. If the service has it, you’re just one click away from watching.

Disney Plus App vs. Netflix: Availability

Netflix gets the win here. It’s been around much longer than Disney+ and so is available in more countries. Currently, you can stream Netflix in 190 countries.

In fact, only four countries or places don’t have Netflix (North Korea, China, Crimea and Syria).

By contrast, when Disney+ launched, it was only available in the U.S., Canada, and the Netherlands. It has since expanded to include Australia and New Zealand.

By the end of March, Disney Plus will be available in the UK, Germany, France, Italy, and Spain.

In due time, Disney+ should catch up to Netflix. For now, if you live in the U.S. (and soon the UK) you’ll have no problem getting Disney+ and Netflix.

Here, Netflix wins the contest by providing more robust parental controls than Disney+. It may be that Disney doesn’t anticipate parents wanting controls.

It has no TV-MA or R-rated content. So, there may be nothing to filter out.

The catch is that users need to do this on every account, not just those their children use. Unfortunately, neither streaming service offers time management options on accounts.

Still, if locking mature content matters to you, you’ll want to go with Netflix over Disney+.

While it may not have Star Wars or Marvel content, Netflix stands out above Disney+ in a number of areas. In the Netflix vs. Disney+ contest, we give the edge to Netflix in the following three areas:

Netflix also shines in its ability to offer a wider range of content. If you have to subscribe to only one service, you’ll find more movies and shows for every member of your household to enjoy.

While Netflix may edge Disney+ out in a few areas, there are spots where Disney Plus wins. Those areas are:

If family-oriented content is king for you, you’ll be happy with Disney+. 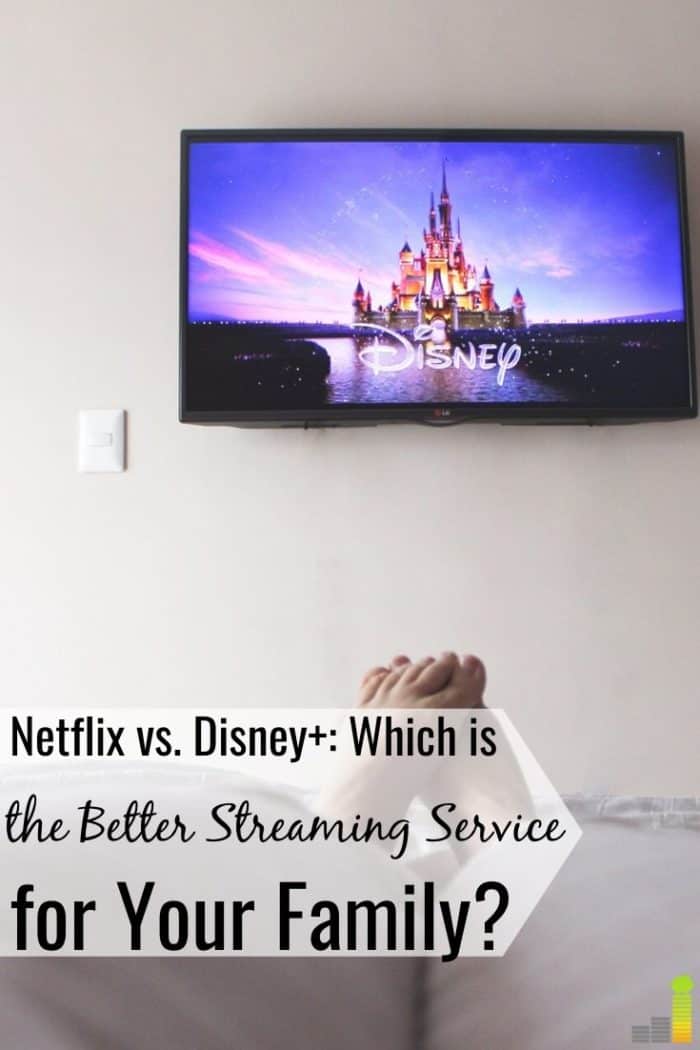 You might be hoping for us to declare an outright winner. Many reviews do that. In our opinion, it really comes down to what you want.

In the contest of Netflix vs Disney+, it’s a tie. So go with what feels right to you.

You can always try Disney+ free trial for a week and try Netflix free for a month. Keep the one you prefer and cut the one you don’t.

No matter which streaming provider you select, you’ll save money over cable.

The post Netflix vs. Disney Plus: Which is the Better Platform? appeared first on Frugal Rules.