Telemundo has something for everyone. It’s lineup includes enthralling telenovelas, reality shows, films, original programming and live sports. FIFA soccer games, Miss Universo, and MasterChef Latino are just a few of the reasons to watch Telemundo.

How to Watch Telemundo Without Cable

There are two ways to watch Telemundo without cable:

Whether or not you can watch Telemundo live over-the-air will depend on where you live. We’ll dive into more details on that in a minute.

First, let’s cover the various streaming services that make it possible to watch Telemundo without cable.

Hulu Live is a popular streaming platform and an excellent choice for watching the Telemundo live stream. There are four ways to watch content on Hulu:

Premium plans have limited commercials in on-demand content. The main difference is between Basic, which has no live content, and Live, which is exactly what it sounds like – live TV.

Hulu Live is just like cable, except it costs less.

If you want to watch Telemundo live, choose Hulu Live. You’ll gain immediate access to the Telemundo live stream as well as Telemundo on demand content.

Plus, you’ll be able to keep up with your favorite shows on other networks as well. Hulu Live channels include:

Learn all about this credible streaming service in our Hulu Live review.

As is true of most streaming providers, you can try Hulu free for seven days to see if you like it. Unlike cable, you can cancel at any time without fees or added costs.

Are you a soccer fan? If you enjoy watching live soccer matches and want to watch Telemundo live, fuboTV could be your best bet.

For $54.99 per month, you’ll be able to watch Telemundo and a number of other Spanish language channels. Those include:

As its name implies, it got its start broadcasting soccer games. For many years, fuboTV was the passionate soccer fan’s best way to catch all their favorite matches.

It’s still a standout option for soccer, but fuboTV has expanded to offer much more.

Like Hulu Live, this streaming service offers a mix of the most popular channels. If you’re used to cable, you’ll feel right at home with fuboTV.

The one downside to fuboTV is that depending on where you live, you may not receive local channels like ABC, CBS, FOX, and NBC.

If that’s important to you and you feel like fuboTV offers everything you want, consider buying a digital antenna on Amazon.

We have two Mohu Leaf digital antennas in our home. For a low, one-time cost we have anytime access to our local networks.

Read more about fuboTV in our comprehensive review.

Like Hulu, fuboTV offers a free seven day trial. Signing up is easy and you can cancel online anytime.

You can also watch Telemundo live through YouTube TV. While YouTube is known for user generated content, the social media giant launched a streaming TV service awhile back.

It’s a solid choice for people looking to cut the cord.

For $50 per month, you can watch Telemundo as well as many other popular channels.

There are premium channel packages you can add as well for $5 to $7 per month to further customize your experience.

Like the other services mentioned, YouTube TV offers a free 7-day trial so you can test it out risk free.

If you currently have cable, you’re probably familiar with DirecTV. The satellite giant launched its own contract-free streaming service, DirecTV Now, which AT&T bought and renamed to AT&T TV Now.

It’s guide makes it easy to find what you want to watch and its platform is relatively glitch-free. Pricing wise it’s a bit higher, depending on which channel package you select.

It’s lowest end “Plus” plan starts at $55 for 45 channels. Other packages are as follows (all prices shown are per month).

You can watch Telemundo live with any of AT&T TV Now’s packages. If cost is most important to you, go with the Plus package.

If you’re looking for more Spanish language channels, consider the Optimo Más package as it includes other Spanish channels in addition to Telemundo, including the following:

Dive deeper into all this streaming service has to offer in our AT&T TV Now review. Like the other services mentioned, it also offers a free 7-day trial.

As is the case with all streaming services, you can cancel anytime free of charge.

Remember that digital antenna we mentioned earlier? Well, it’s the cheapest way to watch Telemundo, provided it is offered in your area over-the-air.

Do you remember the days before cable and Netflix? Metal antennas affectionately called bunny ears sat atop every television in America and provided a gateway to a world of entertainment.

All you needed to watch TV was an antenna. When analog TV was replaced with a digital broadcast signal, a digital antenna became required to access local channels for free.

Just as in the past, you can now access local networks like ABC, CBS, FOX, NBC, and PBS over-the-air with a digital antenna.

Depending on where you live, you’ll be able to watch other over-the-air, or publicly broadcast, channels as well.

Like those major networks already mentioned, Telemundo has affiliates in more than 30 states.

If you live near a Telemundo station, you will be able to watch Telemundo over-the-air on your TV without a cable or streaming service subscription.

Check this FCC website to see if Telemundo broadcasts live near you.

How to Watch Telemundo for Free

This is a one-time cost. There are no monthly fees.

If there is not a Telemundo station near you, you’ll need to sign up for one of the streaming services mentioned here.

Unfortunately, there’s no way to watch Telemundo online for free.

Can You Watch Telemundo on Apple TV, Chromecast, Fire TV, or Roku?

If you’re worried that canceling cable means you’ll have to buy another expensive piece of equipment, put that fear to rest.

Telemundo is available through all the services mentioned on a variety of platforms.

If you’re new to streaming, here’s how it works.

You need two things to watch Telemundo live without cable.

1. A subscription to a streaming service.

2. A smart TV, laptop, tablet, or other streaming device to watch it on.

Examples of popular streaming devices or platforms include:

You buy one of these devices once and connect them to your TV. These devices connect to your home internet connection through Wi-Fi, like many of the other devices in your home.

All of the streaming services mentioned here are available on Samsung and LG smart TVs as well.

If none of those options work for you, use your laptop, smartphone, or tablet. The bottom line is that it’s very easy to watch Telemundo without cable. 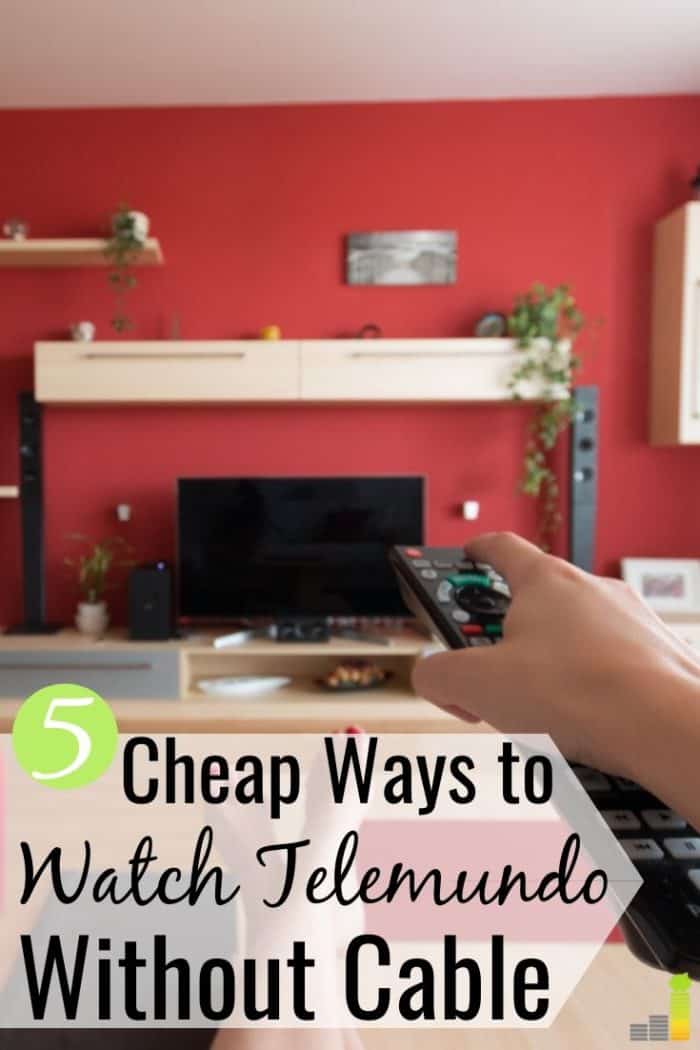 How to Get Telemundo Without Cable

If a fear of losing Telemundo has kept you from cutting the cord, fear no longer. As you can see, there are many ways to watch Telemundo live without cable.

For a fraction of the cost of the average cable contract, you can enjoy all your favorite novelas and sports. No contract. No fees. No hassle.

What are you waiting for?

Try one of the streaming services, like Hulu Live or fuboTV, now and start saving.

Which of the above streaming services have you tried? How much do you spend monthly for cable content? What’s your favorite cable channel you like to watch?

The post How to Watch Telemundo Live Without Cable appeared first on Frugal Rules.