Do you like watching TV with friends? The coronavirus pandemic has made it harder for friends and fans to watch the latest episodes of their favorite shows together. But a new streaming service named Vidgo TV is changing all that.

Its built-in social sharing features, mobile-first platform, and channel lineup make it affordable to cut the cord and stream your favorite content anywhere. Integrated chat rooms, watch parties, and live react videos are just a few of the unique features that make Vidgo a solid option for social cord cutters.

Dive in to all the details in our Vidgo review.

What is Vidgo TV?

Vidgo calls itself a social TV streaming platform. Since jumping on the scene a few years ago, it’s quickly become a suitable cable alternative and a decent competitor to other streaming platforms like Hulu Live and Sling TV.

What makes it different is the social sharing features and mobile-first platform it offers. If you don’t often watch TV alone or enjoy watching shows on your phone, give Vidgo a try.

There’s a lot to like about Vidgo. Like other streaming services, it has a solid lineup of popular channels and lets you sign up without a contract. There are no credit checks or hidden fees and you can cancel at any time.

But, what sets Vidgo apart is the social integration it provides.

Vidgo offers a social platform to interact with others while watching live TV. Especially in a time when social gathering isn’t encouraged, it’s a fun way to stay connected with friends and family while watching your favorite shows.

Social features come with all Vidgo packages and include the following:

If you want to watch shows and sports with friends and fans, there’s no better, integrated option than Vidgo.

Something that might surprise you is how good the Vidgo channels are for sports fans.

It’s great for live sports and is one of the best ways to get ESPN without cable. When you pair it with a digital antenna like the Mohu leaf, you can get all your local channels too.

As you’ll see in the Vidgo channels chart below, it includes all the ESPN and Fox Sports networks. It also includes the NFL Network.

Vidgo gives you national, regional, and local sports coverage. About the only thing you’ll miss is NBA, NHL, and MLB games on their respective networks.

Since it also doesn’t carry TBS or TNT, if you’re a huge NBA fan, you may want to look at Hulu Live or fuboTV.

Another area where Vidgo stands out is with its Spanish language plans. While many services offer Spanish channel add-ons, some Vidgo plans are entirely Spanish.

The downside is that you can’t have both English and Spanish language channels. But, you can enjoy 14 popular Spanish channels through Vidgo Latino for just $15 per month.

The Latino Mas package includes an extra 16 channels in addition to the above for a total of $24.99 per month.

The Vidgo channel lineup for Spanish speakers is unparalleled in the streaming universe. We can’t find anywhere else offering all of these channels in one spot.

The downside is that you cannot receive both Spanish and English language channels through Vidgo. You must pick one or the other. Or, have multiple accounts.

Still, if you’re looking for Spanish stations, Vidgo is a solid option.

Vidgo is an affordable option, especially when compared with the average cable bill of $110 per month. With packages starting at $39.99 per month, it sits in the middle of the pack when it comes to streaming services.

“Skinny” bundle options like Philo are cheaper at $20 per month, but Sling TV and Hulu Live are a bit more at $45 (for Orange and Blue) and $55 per month, respectively.

Vidgo channel packages are as follows:

Particularly if you like watching live sports, Vidgo is a terrific option. It’s actually cheaper than Sling Orange + Blue and fuboTV, which is what you’d need for a comparable option. It’s sports offering includes the following channels.

If you’re a college football fan, you’ll get everything you want with Vidgo. Plus, the ability to schedule watch parties with friends and interact together while watching.

When you compare Vidgo with other leading streaming providers, its price is competitive, especially considering the amount of channels offered.

There is a 7-day free trial, so you can give the service a whirl before signing up.

While we’ve touted the sports channels this service offers, that’s not all there is to like. Between its two packages, it has a well-rounded and diverse channel lineup. Many popular networks are included.

For an extra $10 per month, you can choose to upgrade to Vidgo’s Plus lineup, which provides an extra 17 channels. Most of them are sports related, and include all the Pac-12 networks.

As you can see, there’s not much missing from Vidgo’s channel lineup. However, there are a few notable networks missing.

If you purchase a digital antenna or already have one, you can cross CBS and NBC off that list as you’ll get all your locals for free, forever.

Few streaming options carry all the Disney, ESPN, and the FOX family of networks. And, Vidgo says no one offers it for a lower price.

Still, other than FOX News, there’s no good option for news stations. CNN and MSNBC are both missing.

If having those channels is important to you, try Sling TV, which offers it along with a variety of other popular channels for about the same price or a little less per month.

Like many other streaming services, Vidgo works with just about every major streaming device. You can watch on an Android or iPhone as well as tablets and smart TVs.

It works with Roku, Amazon Fire TV, and Apple TV.

It does not work with laptop or desktop computers. And, the social sharing features are inactive on all devices other than phones and tablets.

Vidgo is still a startup and its platform reflects that reality. While it is intuitive and easy to find something to watch, it lacks more robust features offered by many other streaming services.

It’s less flashy than Sling TV and Hulu Live, but does include a basic channel guide that’s easy to browse.

However, you have to click in a time slot to see what show is playing. There is no preview offered in the guide as there is with many other services. This is a hassle, especially if you don’t know what you want to watch.

It’s just one extra click, but that could become frustrating over time.

You can break up your channel view into all, favorites, recents, sports and family. This provides a helpful way to segment content.

Do you get local channels?

ABC and FOX are included with a Vidgo subscription. If you want CBS, NBC or any of your other local channels, your best bet is to buy a digital antenna.

We have several Mohu Leaf antennas, which we bought on Amazon for an affordable one-time cost, and love them. It quickly and easily connects to your TV and picks up all the local channels available in your area.

Unlike streaming services, there are no monthly fees with a digital antenna. Just a one time, upfront cost. After that, you get all your locals free for life.

You can switch streaming providers anytime without losing your local channels. And, if you need to cut back one month, you can do so while still being able to watch your local networks.

Does Vidgo have a DVR?

One area Vidgo falls behind competing streaming services in is with DVR service. It does not include a DVR. This means you can’t record anything. However, in late 2019 it said it was planning to add DVR service “very soon.”

COVID-19 may have curtailed those plans, because it still doesn’t have it. Instead, Vidgo focuses on social sharing features that other services don’t offer.

Another area where Vidgo is lacking is in on-demand content. Everything is live. While this stands out in the streaming world, Vidgo may simply be choosing to make its mark in social sharing.

Almost every other streaming service, including PhiloTV, SlingTV, and Hulu Live offers the ability to record shows and watch them later through a Cloud DVR service. This just means the shows you record are saved on servers, not hardware in your house.

If on-demand content is critical for you, consider pairing a Vidgo subscription with a legacy Hulu membership. At $4.99 per month, you’ll have access to a vast library of content.

Read our Hulu review for all the details on that service.

Or, sign up for Netflix. At $14.99 per month, your overall cost will be pricey, but still quite a bit less than cable.

Vidgo says it’s working on adding a video on demand library of content and ability to playback shows that aired during the past 72 hours. As of yet, it hasn’t offered those features, but it may at some point soon.

There’s a lot to like about Vidgo. But, as with anything, there’s also some drawbacks.

While Vidgo is an ideal choice for a sports fan, its lack of DVR hurts. If you’re not at home to watch your team play, you have no way to watch it later.

And, while the social sharing features are unique, they don’t work unless you’re watching on your phone or a tablet.

Still, at only $40 per month, it’s a decent option for those looking to cut the cord on cable. 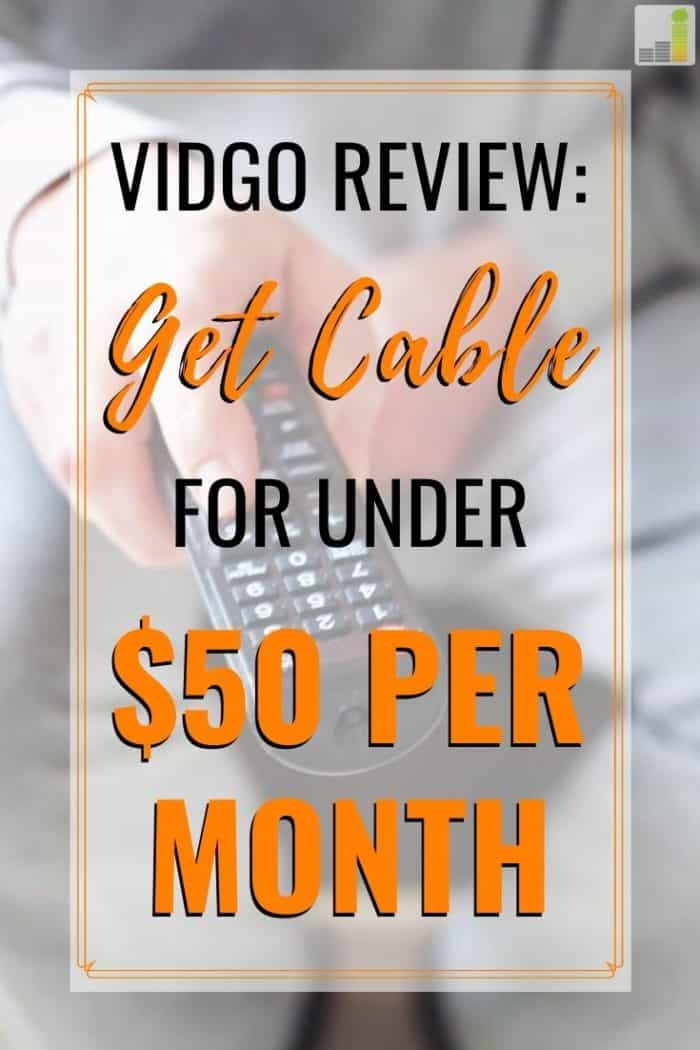 Do you like watching TV with friends? Are you often on your phone during your favorite shows? If so, Vidgo could be perfect for you.

Whether you like entertainment programming or live sports, Vidgo offers both for just $40 per month. This is a huge savings over cable. And, with no fees, you can cancel worry free at any time.

Try Vidgo for free for 7 days and see if this new cable alternative is right for you.

What is one must have for you to cancel cable? How much do you pay for TV services each month?

The post Vidgo TV Review: Get Cable for Under $50 Per Month! appeared first on Frugal Rules.